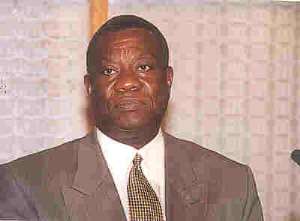 The former Vice-President, Professor John Atta Mills says the yearning by the electorate for the return of the National Democratic Congress to political power in January, 2005, shows that the party holds the only promise for the country’s unity and development. The pleadings of the electorate for the return of the NDC to properly manage the country’s resources and bring lasting relief to the people have become more intense than ever, he said . Prof Mills, who was addressing NDC activists in the Efutu Constituency at Winneba on Sunday, pointed out that “the broad masses of the people wished the next elections were conducted today to enable them to propel the NDC back to political power to re-organise the social and economic structures of the country”. He also informed the gathering about his intention to contest the presidential slot of the party and the need for them to endorse his nomination to lead the NDC to victory in the next presidential and parliamentary elections. According to Professor Mills, the people, after sampling the management of the economy by the NDC and the Kufuor administration, have realised that the prices of goods and services before the last elections were cheaper than they are today. “It is a blessing in disguise that the NDC lost political power to the NPP to offer the good people of Ghana the chance to have an informed opinion of the mode of administration of the two parties,” he said. He said the people have at the back of their minds the promises that the current administration made to alleviate their plight and added that the rapid increases in the prices of goods and services have bewildered their imagination and intelligence. Explaining further his intention to contest the NDC slot, Prof Mills stated that the vast experience that he gathered when he served as the vice-president of the nation, in addition to his constant touch with the vast majority of activists of the party, put him in a good stead to lead the party to fight and win the next polls. He said under his leadership, the structures of the NDC will be re-energised and activists resourced to motivate them to reach out to the electorate throughout the 200 constituencies of the country. The former Vice-President, therefore, appealed to delegates to endorse him as the presidential candidate of the NDC for the 2004 polls at Saturday’s special delegates congress of the party.