No Presidential Jet For Kufuor 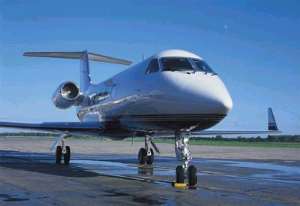 ...Insight insists Gov't have such plans... The Ministry of Information and Presidential Affairs has dismissed speculations that the government intends to buy a new Presidential Jet. "There is no truth to speculations that the Government intends to buy a new Presidential Jet," Mr. Kofi Amponsah Bediako, Assistant Government Spokesperson, said. The issue of the presidential jet re-surfaced again this week when an Accra private newspaper said the government intends to buy a new jet with sitting capacity of between 30-40 seats. Mr Kwabena Agyepong, Press Secretary of the President, denied the report saying that the letter the newspaper referred to as the source of the story from HSBC, which was involved in the purchase of the Gulfstream III, was an old one. Even then the government rejected the offer of HSBC. Meanwhile, the “Insight” which published earlier this week that the government intends buying a 40- seat aircraft insists that the government has such plans. It says, it has obtained yet another letter from the HSBC addressed to Ghana's Minister for Finance, which suggests more strongly that the government of Ghana is considering the purchase of a bigger presidential jet. The paper's first letter published in support of the story is dated March 22, 2001, whilst the second one is dated April 9, 2001. Excepts of the letter signed by the Director, Project and Export Finance of HSBC, J.M Bailey reads, “Furtherance to the letter sent to you by my colleagues Julian Lynn and Richard Hodder dated 22nd March 2002, we are able to confirm that the ministry of finance will shortly receive a preliminary proposal from HSBC and the Gulfstream Corporation in relation to the sale of the Gulfstream GIII aircraft MSN 493. Representatives during April 2001 to agree to plan of action for the disposal of the jet and possibly the sale of the Fokker aircraft currently owned by the government of Ghana. Once agreement is reached, it is likely that Gulfstream will suggest that the aircraft is flown to the company's facility in Savannah, Georgia, USA to expedite the sale process. This will enable the sale price to be maximized through increased exposure to potential buyers. The proposal will also outline the course of action for the sale of the Fokker F28. We would be grateful to receive any information that you have on the specifications and conditions of this aircraft. Whilst in Accra, Gulfstream and HSBC will be pleased to discuss the government of Ghana's requirements for the purchase of a new 30-40 seat aircraft. The details of the potential financing structure will also be outlined at this time.