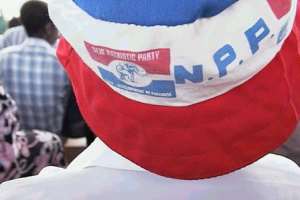 The New Patriotic Party (NPP) has congratulated the government “for its bold and courageous decision to stop pursuing the IFC loan approved by Parliament on July 12, this year.” The party however says “it is unfortunate that the noble intention behind the one billion IFC loan, specifically arranged to rebuild the battered infrastructure bequeathed to it after two decades PNDC/NDC has been halted due to several problems including the systematic campaign by the opposition NDC to denigrate the facility and incite public opinion against it.” A statement issued by the party in Accra said “there is no doubt that it was the strident stance of the NDC and its agents on the loan that gave Ghana's development partners the opportunity to lose interest. The NDC MPs should be ashamed therefore, at the happiness they exhibited when Mr. Osafo Maafo broke the news that the government was no longer going to pursue the negotiations,” the party stressed. The party observed that in declining the loan, a brilliant opportunity had been lost to reduce poverty in the country. “The NPP however, commends the government for demonstrating sensitivity to the sensibilities of sections of the public and our long-standing traditional development partners by withdrawing from the arrangement,” it said. The NPP observed that through this gesture, the government has demonstrated that it is one that listens to and takes on board, the views and concerns of the people and, therefore, desirous of building consensus on national issues. “It is the hope of the NPP that the setback occasioned by the withdrawal notwithstanding, the government's efforts to ensure the massive rebuilding of the infrastructure destroyed during the decades that was supposed to have stopped the decay, will continue to ensure massive development in freedom” it said.