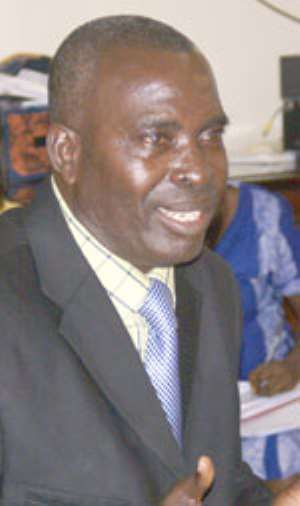 By Zambaga Rufai Saminu, & Alfred Adams
Mr. Paul Evans Aidoo, Western Regional Minister
THE Sekondi Takoradi Metropolitan Assembly (STMA) seems to be losing the battle against filth in the metropolis, due to failure and laxity on the part of contractors who have been contracted to collect the refuse in the twin-city.

An avalanche of sanitation contractors have invaded the city to compete with ZoomLion Ghana Limited, a leading waste management company, which had in the past made sure the city was clean.

The companies in question seem to be lacking the capacity and the wherewithal to tackle the sanitation problem in many of the areas zoned to them by the Assembly, thereby creating serious problems with the collection of the refuse in their respective zones in the city.

The situation debacle, which has become a source of worry to many city dwellers, has resulted in what could best be described as a crisis in the management of waste in the city's development.

To make matters worse, the rainy season has compounded the situation in some of the areas such as New Site, Tankrom, Effia and Market Circle, which consistently has had to constantly battle with refuse in the rain, particularly during floods.

Collection points have been abandoned in some of these areas for no apparent reason, yet they have been zoned to some of the sanitation contractors.

When contacted on the subject, the Regional Supervisory Manager of ZoomLion Ghana Limited, Mr. Geshon Sogbey, confirmed the inability of some of these sanitation companies engaged by the Assembly, but expressed the willingness of ZoomLion, which has the capacity, wherewithal and the technical ability in waste management, to take up additional tasks to eradicate filth in the metropolis.

He said all the areas demarcated to the company have constantly been monitored carefully by his staff, and the refuse being collected in the areas properly managed to keep the vicinity clean.

The improper disposal of refuse in the twin-city has aggravated the poor sanitation situation, and made the collection difficult.

In some areas such as Effia, refuse containers are in the middle of the dumping site filled to capacity without being discharged, whilst communities continue to dispose refuse indiscriminately, without due course to the hazards of malaria and other airborne diseases that could result from their actions.

The situation seems to be getting out of hand, as one could easily watch pavements of some major streets engulfed in filth, with nobody seeming to care.

A typical example, as observed by The Chronicle, is the main road leading to the Takoradi Polytechnic, which has been engulfed in filth, due to the inability of the Assembly to order the contractors to collect the refuse being deposited in the area.

The situation is worse when it is raining, because of the stench emanating from the refuse.

There seems to be rubbish everywhere, indicating clearly that the Metropolitan Assembly, which has the oversight responsibility of seeing to the cleanliness of the city, has lost touch with that mandate.

The assembly members, who should also be talking to remind those in authority to act, are also failing to live up to expectation, making their presence in the Assembly ineffective.

The only Assembly Member whose work has largely been appreciated by his constituents, and those in authority, is the Member for Effiakuma-Zongo, who doubles as the Presiding Member of the Assembly.

Through his dynamic and effective leadership role played in that part of the city, the Effiakuma community introduced the 'Dump as you pay policy,' which has been working effectively.

Community members pay before they are allowed to deposit their refuse into the containers being provided by the unit committee of the electoral area, making the zongo community one of the law-abiding electoral areas in the city.

The Problem of Presidential Travels and the IMF
15 minutes ago