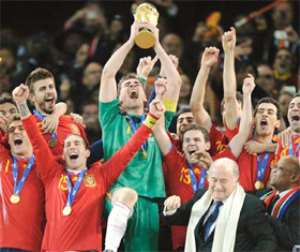 For the umpteenth time, the prediction of Paul the psychic octopus has come to pass, as Spain whipped the Netherlands 1-0 to win the 19th FIFA World Cup in South Africa.

To intense media interest on Friday morning, Paul, who has an unblemished record in the tournament so far, picked Spain as the victors in yesterday's final and also predicted that Germany would defeat Uruguay in the third-place play-off, which indeed came to pass.

Paul the psychic octopus has had all his predictions regarding the 2010 FIFA World Cup right, attracting the goodwill of some and opprobrium of others. Yesterday's right prediction could turn the Sea Life Oberhausen, where the octopus is being kept, into a Mecca.

In the match, European Champions Spain dominated proceedings from the blast of the referee's whistle, but dangerman David Villa's connecting shot could only find the side-netting.

The physical nature of the match nearly took the shine off the finals, compelling Referee Howard Webb of England to issue four yellow cards in 22 minutes.

This however did not deter Dutch marker De Jong, who gave Xavi Alonso a wild karate kick, attracting the fifth yellow card of the game.

There was drama in the 33rd minute when a fair play kick nearly beat Iker Casillas, further calling into question the speed of the Jabulani (football).

In the 37th minute, Pedro burst forward after receiving a pass from Xavi, but his final delivery went wide.

In the closing stages of the first half, the Netherlands turned the tide with a sharp attack; but Iker Casillas rose to the occasion by saving Robben's pin-point strike, leaving the scores 0-0 at the end of the first half.

The second half began like the first, with Spain keeping possession and the Netherlands resorting to counter-attacks. In one of such counter-attacks, Robben snaked through the Spanish defence, but Casillas saved his shot.

Moments later 'Saint' Casillas was again called to action when Sneijder's pass found an unmarked Robben, whose goal-bound shot was saved by the keeper.

The physical play in the first half was maintained in the second, forcing Referee Webb to issue out more yellow cards.

Spain continued to mount one onslaught after another, forcing the Dutch midfield and defence to work overtime.

In the 76th minute, an inter-play between Villa and Iniesta produced a corner kick, which was beautifully taken by Xavi; but Sergio Ramos' free header went over the bar.

The 82nd minute saw Robben being presented with a carbon copy of an earlier opportunity, but he fluffed it again.

Spain intensified pressure as the game wore on, but at the end of 90 minutes the score-board was barren, sending the game into extra time.

Extra time witnessed the continuation of the familiar pattern of Spain attacking and The Netherlands defending.

Dutch keeper Maarten Stekelenburg neatly dealt with the point-blank shot by Cesc Fabregas, who came on for Xavi Alonso. A minute later Iniesta fluffed another golden opportunity to put his side ahead.

The European champions pinned their opponents to the wall, dominating every department of the game. A Spanish appeal for a penalty in the opening minutes of extra time was ignored by Referee Webb.

In the 13th minute of extra time, Fabregas weaved through the Dutch defence; however his final strike hit the side-netting.

The Dutch were reduced to 10 men when defender John Heitinga was sent off for pulling Iniesta on the edge of the penalty box.

In the dying embers of the game, Iniesta scored with a powerful volley to shatter the dreams of millions of Dutch who were hoping to bury the ghosts of past World Cup attempts in 1974 and 1978 in which they lost the grand finale to Germany and Argentina respectively.

At the end of 120 grueling minutes, it was the Spanish captain Iker Casillas who lifted aloft the coveted World Cup trophy amid spectacular fireworks at the Soccer City Stadium in Johannesburg, South Africa, drawing the curtains on the 2010 FIFA World Cup, which will go down in history as one of the best-organised tournaments.