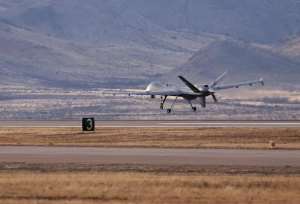 United Nations (United States) (AFP) - A UN report is calling for drones to be deployed in most peacekeeping missions as part of a major technological leap needed to help the United Nations confront world crises, the lead expert of the study said Monday.

The UN mission in the Democratic Republic of Congo, the UN's largest peace force, has been using surveillance drones to monitor rebel groups in the east.

"This is essential technology for missions on the ground. Most missions should have it," said Jane Hotte Lule, head of the five-member panel that prepared the report on technology and innovation in UN peacekeeping.

The report recommended the creation of new special technical missions that would provide the Security Council with satellite images and other real-time data on an unfolding emergency.

"We can't have the council ignorant of the circumstances that we are expecting it to take decisions on," said Hotte Lule.

"The technology is so advanced it should be put to the service of council deliberations."

The recommendations were potentially controversial because the Security Council would have to agree to boost its use of technology in some countries where UN action is seen as intrusive.

The panel found many UN peacekeeping missions to be woefully ill-equipped, with soldiers lacking in basic communications gear.

The report did not address the thorny issue of financing the high-tech boost for UN peacekeeping, but Hotte Lule said the United Nations would turn to member states.

One of the recommendations is the creation of a group of technology-contributing countries which would be able to provide drones, communications gear and other cutting-edge equipment to peace missions.

The 144-page report was released amid rising concern about the safety of peacekeepers who are increasingly being deployed to countries struggling with violence and chaos.

At least 44 peacekeepers have been killed in northern Mali since the mission was deployed in July 2013, many in bomb attacks.