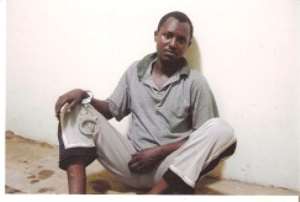 A member of Rwanda's elite Presidential Republican Guard (PPG) survived death in what could be compared to a Hollywood Movie.

President Paul Kagame's bodyguard, Innocent Kalisa who is used to travelling in a First Class if not on a presidential jet, for the first time was sealed in a vegetable container onto a plane and ferried to a safer country after escaping from a Safe House [illegal Torture Chamber] in Kigali, capital of Rwanda.

“I really don't know how I got here, I must have been the luckiest person because the two days I spent in a Safe House, 20 people, which is an average of 10 per day were executed,” the former Republic Guard member, Kalisa [army No. AP98709] who had served in the unit since 2001 narrated to this reporter.

Like many Army Officers in Kigali who are in great nervousness after President Kagame's recent accusations against his former allies to be behind and of their involvement in subversion activities against his country.

Barely months to the country's presidential elections, has Kigali remained hostile to both the opposition and members of the armed forces who have previously had any slight knowledge about the renegade generals who fled the country into exile since last year. With handcuffs still on Kalisa's hand and leg, wearing a skin of fear on his face including the fresh wounds allegedly inflicted to him by his tormentors in a safe house at Kabeza a Kigali suburb. “There were blood stains on the carpet; I knew that any time I was going to be killed,” says Kagame's former close bodyguard. Kalisa adds: “The next night in the safe house, one army Maj. came into one of the rooms and questioned me, he promised me the worst the following day, if I don't tell him the truth.”

“When he left that is when I started planning how I can get-out of the hell. Using the knowledge I got from various course I managed to escape,” Pte Kalisa narrates his nightmare to this reporter.

According to Pte Kalisa, the only clue to his suffering, he says: “They started suspecting me when I was demobilized and visited my brother in Uganda where I was planning to get back for further studies.”

“My brother who was in the army and served in the same unit before me, advised me to go further studies like him,” says Pte Kalisa, adding that: “Apart from visiting Uganda, I have no knowledge about those people [Lt. Gen. Kayumba Nyamwasa and Col. Patrick Karegyeya], it is just because the president no longer trust anybody.”

“At the moment, he [president] may not even trust his own shadow,” says the former bodyguard.

Having served as a close bodyguard and his vast knowledge, Kalisa's fear could be seen wearing his face as he says he doesn't know why he's been tortured and linked to the people he has no contact. Kalisa wonders: “I started serving as bodyguard in 2001, I held responsibilities like close bodyguard for the family; ie the president, the First Lady and the children especially at school.

“I had never harboured any bad motive against them. But why now?” asks Kalisa, adding that: “I have in the past travelled with the President to African States like Tanzania, Mwanza, Zambia-Lusaka, South Africa Durban why me at this time?

“Kalisa? If he is the Kalisa, I know, he was working with us but he escaped from prison,” without giving reason why in the first place, Pte Kalisa was arrested, Colonel Tom Byabagamba who is the overall commander of President Kagame's Republican Guard, told this reporter in an exclusive telephone interview. Sounding familiar with the whole issue and giving no reasons why Kalisa was arrested, Col. Byabagamba added: “That guy is on a wanted list of our police, you can contact the Police spokesperson, and they are conversant with his case.” Col. Byabagamba neither did he mention or single out a single charge levelled against his former subordinate.

However, the Rwanda's Republican Guard commander, Col. Byabagamba referred this reporter to the country's Police Spokesman, Eric Kayiranga who said: “Right now I'm in a stadium, I'm following the defense processions, I can't give the details.”

“Yes, he is a wanted person,” said the Police spokesman Mr Kayiranga when pressed if he was aware of Pte Kalisa's criminal alleged charges. Without giving the details of charges against Kalisa, the police spokesman claimed: “Even through our newspapers he has been mentioned as a criminal, he should be arrested and brought to face justice.”

“I'm not able to give the details, but there is a file in the criminal justice through the Interpol [International Police], he should appear before the court,” Mr Kayiranga told this reporter in a telephone interview, adding that: “I'm not in the office to tell you the case details. The country's Police spokesman, who said that the man is a wanted person with already a file in the criminal justice through the Interpol, also couldn't mention the nature of the charge saying that: “By the time you get back to me, I would have gathered all the information about him and I will provide you with the detailed information.”

President Kagame who has been praised overseas for social and economic progress, has embarked on clamping down on the opposition politicians and the media ahead of the August Presidential elections. Mrs Victoire Ingabire Umuhoza is under house arrest in Kigali, after the court confiscated her passport and denied any movement outside the country. Even an American Attorney, Peter Erlinder who had come to represent Mrs Ingabire was arrested and remained in detention on alleged crimes of 'Genocide Denial'.

For what reason would Rwandan security agents arrested Kalisa when he had been demobilized on 28 January 2010, according to the demobilization certificate, remains a mystery.

Contary to information given about Pte Kalisa, this reporter has independently obtained a demobilisation certificate from the defense ministry which suggests that he was relieved of duties on in January this year.

According to a certificate baring the signature of the country's Minister of Defense, General Marcel Gatsinzi, and written in Kinyarwanda, it reads: “Ministeri y'ingabo irashimira No. AP98709 Pte Kalisa Innocent akazi yakoreye igihugu mugihe yari akiri umusirikare akaba asezerewe kamugaragaro le 28th January 2010. (The Ministry of Defense would like to thank, No. AP98709 Pte [Private] Kalisa Innocent for serving his country whilst was a soldier. He has officially been relieved of his duties on 28th January, 2010.”