A German Racist, Official Of German Central Bank Under Fire Over Anti-Immigrant Slurs 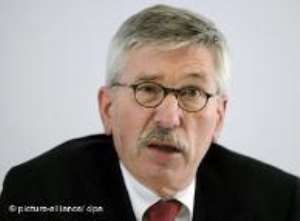 The German chancellor, Angela Merkel and other politicians have lashed out at controversial Central Bank board member Thilo Sarrazin after he reportedly said Turkish, Arab and African immigrants were making Germany "more stupid."

German politicians have expressed consternation at a racist outburst by the central bank's board member and former Berlin senator, Thilo Sarrazin.

Sarrazin was quoted by German media for telling a gathering of businessmen on Thursday, June 10, that Germany was "becoming on average more stupid" because "Turkish, near and Middle Eastern and African" immigrants were poorly educated.

"There is an increase in population groups with different levels of intelligence," the 65-year-old was quoted as saying. "Intelligence is passed on from parents to children. It is about 80 percent hereditary."

Chancellor Angela Merkel told the Sonntag newspaper that such sweeping statements were "stupid and pointless."

She conceded, however, that it was true that the academic qualifications of pupils from immigrant communities needed to be improved, adding that the key to that was "mastering the German language."

"If we promoted and demanded that, then those coming to live in Germany would have great opportunities and they would enrich our lives," Merkel said.

"I wonder how much longer the German Central Bank is prepared to tolerate such an agitator and right-wing populist on its board," she told the Leipziger folk newspaper.

Roth said, the Central Bank which is one of the country's most important public institutions having a leading member with such an attitude was untenable.

She also asked the Social Democratic Party, of which Sarrazin (the racist) is a member, if and how long they were ready to accept Sarrazin in their own ranks.

Another prominent member of opposition, Social Democratic Party, Michael Mueller, has meanwhile said "the renewed provocation by Sarrazin was without question intolerable." He said Sarrazin had already been warned to restrain himself but that he had apparently not learnt his lesson.

Not the first time:
The RACIST banker caused a row last year after he made disparaging remarks in a magazine interview about Berlin's large Turkish and Arab communities.

Sarrazin had to apologize for saying that many of Berlin's Arab and Turkish immigrants have "no production, apart from fruit and vegetable trading."

Meanwhile, the Central Bank has distanced itself from Sarrazin's remarks.

"The opinions expressed were personal," said Susanne Kreutzer, spokeswoman for the Bundesbank. "We cannot comment much on it"

However the central bank's president Axel Weber said last year that the bank's reputation had been hurt by Sarrazin's remarks.