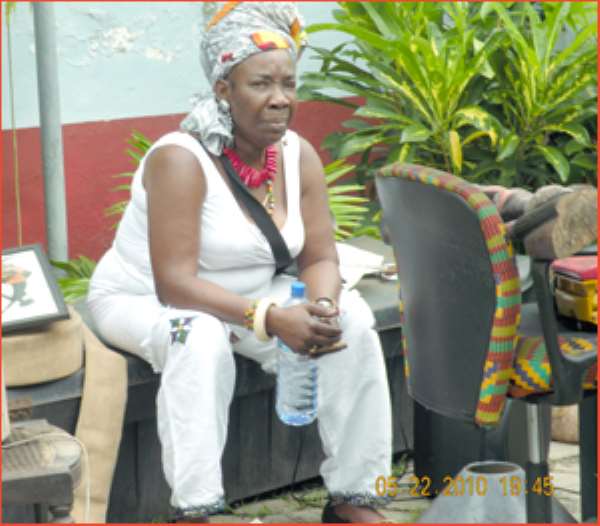 The Akwapim Mountain recording studio and residence of Rita Marley, widow of reggae legend Bob Marley, was a scene of tragedy Saturday night when fire swept through the house and gutted the entire structure.

Property consumed by the fire, which raged throughout the night, was valued at $20 million, according to the wife of the late reggae superstar, who arrived in the country barely a week ago after a foreign trip.

This latest inferno is coming on the heels of similar devastating fires that gutted public and private edifices such as the official bungalow of former President Jerry John Rawlings, Ministry of Foreign Affairs building, Electoral Commission offices, Ministry of Information and Tema Oil Refinery among others.

Located at a place called French Line, not far from Aburi in the Akwapim South District of the Eastern Region, the Rita Marley Recording Studio was stocked with materials of tourist potential.

The multi-million-dollar studio which housed most of Bob Marley's original tapes, was due for commissioning late last year, but the event had to be postponed to allow Rita Marley to attend to some personal issues in the USA.

In her narration to DAILY GUIDE, Rita Marley said the fire was detected at about 6:30pm on the first floor of the building, but soon spread 'wildly' to the soundproof recording hall and adjoining portions of the structure.

Rita said her staff on location at the time quickly called the personnel of a nearby Ghana National Fire Service (GNFS) who in turn sought the intervention of their counterparts in Mampong-Akwapim.

The burnt building A devastated Rita Marley expressed concern about what for her was the unprofessionalism exhibited by personnel of the Fire Service and prayed the authorities to do something about the situation.

She observed that the fire scene was only a stone's throw away from the Mampong fire station, yet they were unable to stop the fire before the damage.

She said despite the calamity, she was not daunted and promised to gather herself and re-start the project, which according to her, aside its tourist potential, would be a source of employment to the youth.

Rita Marley is the queen of Konkonuru, a title bestowed on her by the local traditional authorities, most of who trooped to the place to sympathise with her over the calamity.

Among them were the Chief of Aburi, Nana Otubuor Nana Djan Kwasi II and the Chief of Konkonuru, Nana Ansah Addo.

When DAILY GUIDE visited the fire scene, palls of smoke could still be seen even though the worst was over at the time.

Hordes of sympathizers from all walks of life including the Rastafarian community, turned up at the location to witness the effect of the fire.

Rita Marley had been in and out of Ghana after her virtual relocation to the country and the commencement of the studio project, following her husband's death.

She has blended in with the locals so well that the traditional community continues to consider her as one of their own; hence the bestowal of the chieftaincy title on her. The 64-year-old married Bob in 1966 and has 6 children.