Is the President Travelling Too Much? 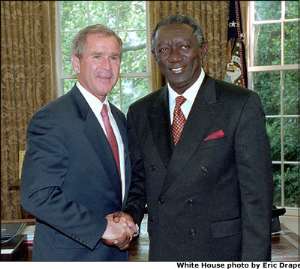 ONE OF the latest jokes in town is that President John Agyekum Kufuor is competing with his Nigerian counterpart and friend, Olusegun Obasanjo, in overseas travelling. When the Nigerian head of state had made some 70 travels a few months ago, our President was hotly pursuing him, having made more than 40 trips, people said. The accusations are that Mr. Kufuor is spending too much of Ghana's scarce resources junketing abroad and bringing little home in return. But we need to look at the President's travels dispassionately, if we are to make a fair assessment of them. It must be accepted that investors, who the President primarily aims at wooing from other countries to Ghana, will not just pack bag and baggage and follow him as soon as Mr. Kufuor approaches them in their various countries. It will take sometime before they come to Ghana to establish the businesses that will create the much-needed jobs and wealth. Even so, from the number of promises made on various trips the President has, so far, made one can predict that the objective is being realised. Many entrepreneurs and governments have pledged to do one or some other thing to help Ghana's economic growth. These promises range from fishing through telecommunication contracts to the construction of roads and railways for Ghana. There is no gainsaying the fact that these are some of the critical areas of economic development for such a poor country as ours. Time and again, the President has explained that most of his trips are paid for by his hosts - presidents, kings and other heads of state who invite him to visit them. Unless his critics can produce evidence to the contrary they should stop painting the picture as though the President's visits were taking a large chunk of Ghana's income. Having said that, we wish to suggest that Government reduces cost of its overseas travels, generally, as much as possible. Recent reports that per diem for delegates who join the President or Ministers on such trips has been increased means Ghana has to pay more than we did a few years ago. One way to cut cost is to send only those who seriously matter on the trips. The practice of sending party hangers-on and friends who loiter when meetings are in progress or doze off when they sit in conferences is not only a drain on our economy but also an embarrassment to the state and the ruling party. Periodically, government should use effective communication channels to brief the populace on benefits derived from such trips and other important programmes it is pursuing for us to appreciate the issue better. Meanwhile, we stress that Ghanaians must tolerate and actually support the president's "numerous" overseas travels. The end may justify the means.