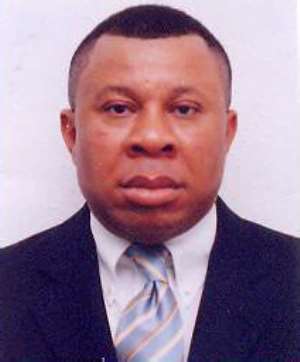 Every counselling session with his father underscored the importance of the timeless virtues of honesty and hard-work. And so frequent were such sessions that they left a looming reminder in the budding mind of the young lad that success and failure were personal choices he must make. “Your future depends on how hard you work today” became a regular sing-song drummed into him. Add these to the father's steely abhorrence of mediocre academic performance among his children and you are left with the larger picture of a boy who is psychologically tuned to succeed.

His name is Emmanuel Osa Agwoje, a 1986 Masters Degree Graduate in Economics of the University of Benin, Benin City. He majored in Banking and Finance in fulfilment of a desire to add to the numeric and statistical content of his B.Sc (Economics) degree obtained earlier from the University of Port-Harcourt.

Today, he oversees the management of a promising investment and asset management company, Equator Capital Limited, as Managing Director and Chief Executive Officer. Equator Capital Limited is located in highbrow Victoria Island on Prince Ade Odedina Street. Given its unique merchant bank style of office arrangement and the sharp dress sense of the staff, a first time visitor would easily figure out that it is already a bank awaiting official license.

Mr. Agwoje's background is as humble as humility can ever be, but he refused to be deterred by it. His no-non-sense father was a lowly paid staff of United African Company of Nigeria (UACN). But whatever material things he lacked were adequately compensated in moral values. And as should be expected, he taught his children sufficient values to herd them on the right path.

However, young Emmanuel had many other things going for him. His cerebral prowess was uncommon and having embraced the Word of God very early in life, ensured that he was headed for the top. He passed in Division One at the West African School Certificate Examination (WASCE). He sustained the momentum; graduating in Second Class Upper category in Economics, from the University of Port-Harcourt. He deplored his all during his Master's programme at the University of Benin and crowned his efforts with The Best Graduating Student Prize among the 1986 Masters set. The title of his master's thesis at University of Benin bore testimony to his desire to expose himself to the mathematical content of Economics which was not sufficiently reflected in his work load at Uniport. He wrote on: AN ECONOMETRIC STUDY OF THE DEMAND FOR AND THE SUPPLY OF COMMERCIAL BANK LOAN. To date, the intellectual content of this work is still regarded as one of the best in this area of Economics.


How did Emmanuel Agwoje who combines good brains with good looks cope with the distractions on campus? The answer lies in self discipline and strong Christian faith which he relied on against unnecessary distractions. Many young people of today hardly spend time to explore the abundant solutions inherent in communing with God. Mr. Agwoje was lucky to know this secret quite early.

What lessons can be drawn from this story? Determination opens doors. Emmanuel did not allow the family's financial capacity to discourage him from embracing education and the determination paid off as can be seen when he was bestowed with two scholarships at the time he thought he may not be able to continue. Emmanuel Agwoje's story affirms that students must know that the choice of what they desire to be is entirely theirs. It also emphasizes that the closer your relationship with God, the higher your capacity to contain unnecessary distractions. The story also brings to the fore, the important role parents must play in shaping the lives and destinies of their children and wards.

Though he now runs one of the most promising investment companies in Nigeria, by far the greatest beneficiary of the enormous capacity he has built for himself over the years is the now rested Allstates Trust Bank Plc. He served at the bank for almost sixteen years and rose to the rank of an Executive Director. While at the bank, he had the opportunity to attend some of the most illuminating training sessions available in the industry for Nigerians. Some of the trainings included a course on corporate credit analysis organized by DC Gardener. He also went through a hands-on training on branch management organized by Fidelity Bank London. At the training, he was taken through the requirements for working in an international branch of a bank. Then, the H Pierson Course on Foreign Exchange and International Treasury which he went through in 1992, gave him advanced exposure into management of bank's foreign exchange and correspondence banking relationship.

Meanwhile, from the Lagos Business School, he had undergone trainings on quality management and senior executive management programmes. All these sessions add up with many others held in Germany and other European countries to prepare him for a wonderful banking career. And while at the Allstates Trust Bank, he virtually passed through all the departments of the bank and by the time he was leaving to found Equator Capital Limited, he had been sufficiently groomed to run a bank of any size.

When measured by all parameters of assessment, the experience, professionalism and high sense of corporate ethic which Emmanuel garnered in nearly two decades of banking work has been brought to bear in defining the present of Equator Capital Limited and shaping the future of the enterprise as seen in superlative successes recorded by the company in just a few years of operation.