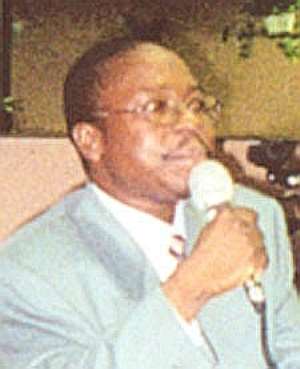 Akoase (Eastern Region) - The Member of Parliament (MP) for Birim North, and former regular contributor to ghanaweb forum "Say It Loud", Dr William Boakye Akoto (no relations to webmaster), will soon be indicted before the Birim North District Assembly (BNDA) for his alleged failure to account for ¢10.051m he collected from the assembly. The money was from his share of the Common Fund, as an MP meant for the rehabilitation of some schools at Akoase, his hometown, but failed to account for it. Following his failure to account for the money after several reminders and for the fact that those schools including Akoase Presbyterian JSS, were hit by a rainstorm in February last year, are still not rehabilitated, the Audit Service has recommended that his conduct be brought to the notice of the general house of the BNDA for appropriate sanctions to be applied against the honourable MP. According to the Audit Service memo to the BNDA sighted by Chronicle, section 235 (c) of the financial administration regulations stated that, full accounting detail shall be given on a payment voucher as follows: “Full particulars of the transaction such as dates, numbers, quantities, purchase order invoices related to the transaction can be checked without reference to any document.” The auditors noted that payment of ¢10,051,000 by a National Investment Bank, Koforidua branch cheque number 105909 was made to Eastern Lite/Honourable Dr Akoto for the supply of building materials in May 2001 on his request. The memo said, as of July 2002 (audit time), 14 months after payment was effected, the MP has not accounted for the payment. It further noted that the assembly in exercising its oversight responsibilities to ensure that items and services paid for were delivered and used for the stated purpose, wrote letter number LC-67/vol-2/194 dated 4 September 2001 and signed by the then coordinating director, K. Kwafo-Akoto, cationed “Accounting for money released to you from the MPs Common Fund Account,” and addressed to the Hon MP requesting him to submit the relevant documents on the amount released to him so as to acquit the payment but the MP could not submit any relevant documents or details on the transaction. According to the auditors, the MP’s failure to account for the payment effected does not only raise doubts on the authenticity of the payment, but also does not enhance probity, accountability and transparency and defeats the government’s “zero tolerance for corruption” among Ghanaians. Officials of the Birim North District Assembly were tight-lipped as no one wanted to comment on the matter. They, however, said the appropriate authorities would go into the matter without fear or favour. Several attempts by Chronicle to contact the MP, Dr William Boakye Akoto, for his comment proved futile, since his mobile number available to the paper failed to answer and could also not get him at Parliament. When the Eastern Regional Minister, Dr Francis Osafo Mensah, was contacted he stated that he was aware that a rainstorm hit some schools at Akoase and arrangements were made for the Birim North District Assembly to release the said amount to the MP to enable him assist the affected schools. He however, said he has not been able to check if the MP has used the money for the intended purpose.