More Parliamentary Seats To Be Created 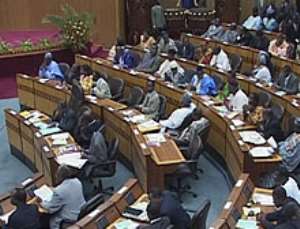 It is now certain that more than 200 seats will be contested for during the 2004 Parliamentary election. What is uncertain is the number of seats to be added 20, 30, 40 or 50. Director of the Electoral Commission (EC), Mr. Kwame Damoah-Agyeman, when he appeared on a JOY FM programme, Front page, last Friday. Also on the programme, hosted by Kweku Sakyi-Addo, was the editor of the Daily Dispatch, Mr. Ben Ephson. As the EC awaits the Presidency and the Ministry of Local Government to decide on the number of new districts to be drawn up, strategists of the political parties will be doing their own calculations, based on the different scenarios of the extra constituencies to be created. Mr. Damoah-Agyeman explained that they had finished their basic guidelines but were waiting for the new districts to be demarcated. The EC Chief Director said creation of new constituencies was due because the 1992 Constitution states that there should be a review of the constituencies either after seven years of the last review or twelve months after the publication of results of a population census. The last review was in 1991 and the population census results were announced over 12 months ago. An important consideration in the determination of new constituencies will be the size of Parliament, the number of members the economy can accommodate and its seating capacity. In an earlier interview with The Daily Dispatch on how the EC will deal with possible complaints by political parties, the EC Chairman, Dr Kwadwo Afari-Gyan, said, “We do not think about political tensions when we are demarcating constituencies. We have very clear criteria and very good reasons for doing so”. If anyone or group feels aggrieved, that person or group can appeal to a tribunal to be appointed by the Chief Justice, as in Article 48 of the 1992 Constitution.” A couple of results from the 2000 Parliament elections may give readers a fair idea of the need to create more constituencies. The 2000 Parliamentary elections saw Dr Josiah Aryeh of the NDC, obtaining 34,693 votes but missing Parliament. The NPP’s Kofi Wayo had 29,026 but missed being called on Honourable. In Parliament are Honourable Norbert Awulley of the NDC (Builsa North) with 14,733 votes and Honourable Akwasi Afrifa of the NPP with 18,228 Dr Aryeh lost to Ms Theresa Tagoe (NPP 49,585) in Ablekuma South and the NDC’s Dr Mustapha Ahmed pipped Mr. Wayo with 29,576 votes in East Ayawaso.