To Disqualify or not to Disqualify: The Implication of Alan Kyerematen’s decision to run in the NPP’s Presidential Primary 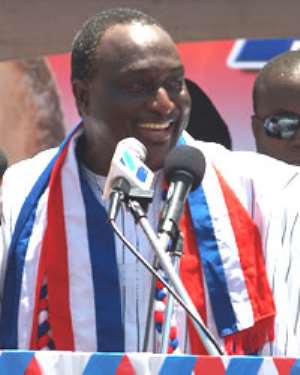 Ever since the NPP opened nominations for its presidential primaries, five people have indicated their intention to run in the upcoming elections. These are Prof. Frimpong Boateng, Evangelist Kwame Koduah, Hon. Isaac Osei, Mr. Alan Kwadwo Kyerematen and Nana Akuffo Addo.

Of the five contestants, no one's name raises more eye brows than that of Alan Kyerematan. And this has more to do with the man's persona than his personality. Mr. Kyerematan, I must admit, is a very good looking man and has a lot of appeal not only within the NPP but among some floating voters and even some members of the other parties.

These not withstanding, I have serious issues with Mr. Alan Kyerematen's decision to be NPP's presidential candidate. If it may be recalled, four months after the last NPP presidential primaries in late 2007 we read with dismay Mr. Kyerematen's letter of resignation from the NPP in the media. Among others, Mr. Kyerematen cited harassment of his supporters in the NPP as the reason for his resignation. Various top members of the NPP expressed their disappointment with Mr. Kyerematen's decision. But the one that resonated with me the most was that of Mr. Hackman Owusu Agyeman when he said 'True Danquah-Busia men don't behave like this'.

I am an NPP member; an obscure one of course. My membership of NPP is not preconditioned on what I stand to gain from the party. It's my belief in the ideals and principles of the Danquah-Busia-Dombo tradition. These ideals and principles are innate and they are non-negotiable. I cannot see myself belonging to any other party because they will not share the same beliefs as the NPP. I don't agree with every decision of the party. Indeed the actions, inactions and utterances of some members of NPP have been distasteful or humiliating at times but not on one occasion have I even fiddled with the idea of resigning or dissociating myself from the party. Mr. Kyeremanten, a former Ghana's ambassador to the United States during NPP's term, a former NPP minister of trade and industries and someone who has run for the highest office of the New Patriotic Party (presidential candidate) must have more of the above beliefs and principles than me. This is the more reason Alan's resignation in 2008 raises questions a lot of questions for me. Alan's resignation raises questions about his allegiance, loyalty and commitment to the party and the foundation of his belief in the ideals of our great tradition. What is his motive for being a member of the NPP? I wish I could answer this question.

Recently at one of Alan's tours in Greater Accra, he is reported to have stated in response to a question that he never resigned from the NPP and that he only complained about certain issues in the party. I think that was very insulting to say the least. Does Mr. Keyeremanten think we have short memories? Mr. Kyeremanten's aide, Yaw Buaben Asamoa was on Peace FM the next day and was struggling to defend this answer. He ended up saying that if there were any issues with that letter the vetting committee of the NPP will sort that out during the vetting. I have heard this same refrain in other media. Buaben Asamoa further argued that if Alan wasn't a member how come he helped so much in the campaign? My simple answer is there are so many non members of the NPP including musicians who helped in the 2008 campaign. Your participation in the campaign alone cannot imply your return to the party.