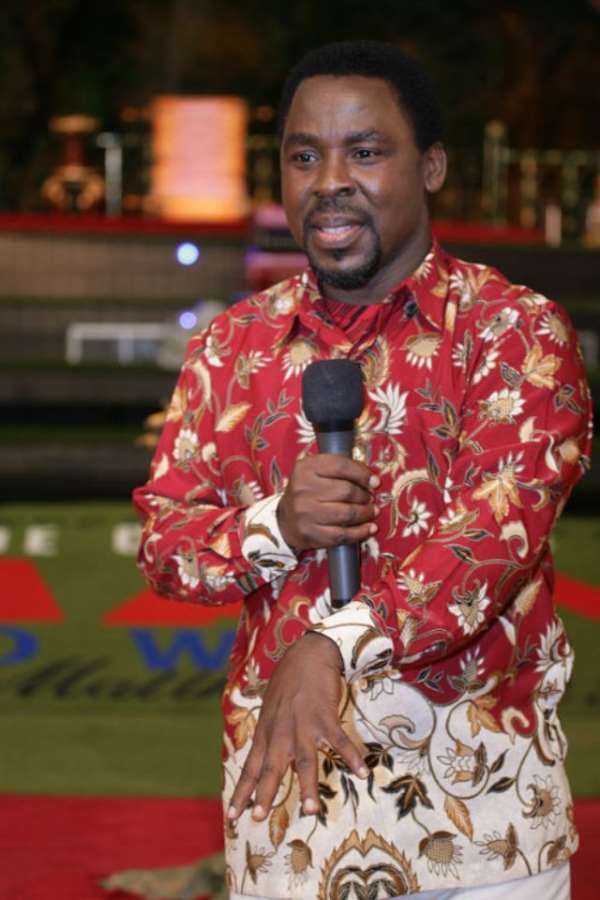 With the news of earthquakes, natural disasters and scientific phenomena's dominating world news, it does seem to cross one's mind that the earth and its climate are changing, and in times such as this that one considers the need for a prophet, a mouthpiece between God and His people. While people discuss, debate, argue and lament the frustrations and tragedy these disasters pose, careful observers would know that truly there is one such prophet.

Since the beginning of this year, 2010, Prophet TB Joshua, of The Synagogue, Church Of All Nations, Lagos, Nigeria has already accurately predicted the coup d'état and capture of Niger's President, Joe Stack's suicidal plane crash in Austin, Texas, the devastating earthquakes in Haiti and Chile, the huge Indian fire, the plane crash which killed Polish President, the earthquake in China and the sudden assassination of an Indian politician in a public meeting – not to mention the volcanic ash cloud that has caused an unprecedented closure of airspace.

Two weeks later, on Sunday 31st January 2010, Prophet T.B. Joshua prophesied further about what he had seen in the sky calling it another natural disaster. “This other natural disaster – can we call it snow? And the thing will be falling like a whitish thing and it will stop the whole system. This will come from the hill. It's a strange thing.”

It was on a Thursday the exact day of the week Prophet TB Joshua mentioned that we should pray and fast for nations around the world - Thursday 15th April 2010, that news hit world media that clouds of volcanic ash spewed into the air over the British Isles and Europe. A volcanic eruption which occurred in Iceland spewed black smoke and white steam into the air. The ash plume, which rose to between 20,000 feet and 36,000 feet lay above the Atlantic Ocean close to the flight paths for most routes from the U.S. east coast to Europe. The whole of British airspace was affected causing an unprecedented closure of airports and cancellation of flights. Reports state that the airline industry is losing an estimated $200 million a day and delays and cancellations are expected to last at least through the weekend.

The thing that Prophet TB Joshua saw in the sky in the vision God had shown him was a cloud of volcanic ash which truly caused negative effects in the whole of Europe and indeed worldwide.

The volcanic ash cloud making much of northern Europe a no-fly zone has hurt the prices of airline stocks, paralyzed air cargo delivery and disrupted business and leisure travel. Aviation experts said it was the first time in living memory that an ash cloud had affected some of the most congested airspace in the world. According to a scientist in Iceland, the ejection of volcanic ash — and therefore disruptions in air travel — could continue for days or even weeks.

The volcanic ash cloud which drifted into European airspace, on Thursday caused shutdowns and cancellations in many nations - countries around the world including: Austria, Belarus, Belgium, Croatia, Czech Republic, Denmark, Estonia, Finland, France, Germany, Hungary, Ireland, Italy, Netherlands, Norway, Poland, Romania, Slovakia, Slovenia, Sweden, Switzerland, Ukraine, United Kingdom, Russia and Spain. Air travel throughout Europe and around the world was still disrupted Saturday as thick clouds of ash from a volcano eruption in Iceland continued to drift across the continent. Officials expect air travel to be disrupted for several days.

The strange occurrence of the volcanic ash and the effects it caused fast became a topic for discussion among scientists. An investigative mission was carried out by scientists to analyze samples taken from the volcanic ash cloud sitting over Britain. A plane carrying the researchers flew right up to the cloud to test its contents. The data could reveal important information about the environmental impact of the eruption.�The information gathered would enable experts to determine where the concentrations of abrasive particles and acidic gases might be dangerous.

The natural disaster was a strange thing just as the prophet had said - it was the first time that an ash cloud had affected some of the most congested airspace in the world. Observers in Scotland reported the smell of sulfur in the air with sightings of strange hazy ash clouds in the sky.

Something strange did indeed happen – and continues to happen as the cloud of volcanic ash shows no sign of abating. It is in times like this when the fragility of humanity and technology is clearly demonstrated that – we simply have to turn back to God and the Bible. As TB Joshua himself said a few weeks ago live on Emmanuel TV, “If I say 'God says' and it does not come to pass, this will serve to disapprove me, my commission, my mission”. But week by week, rather than his mission being disapproved, there is further evidence that God still speaks through His servants.