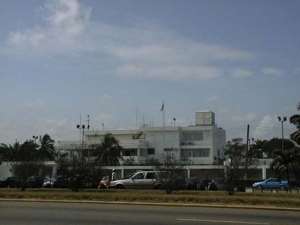 The United States Embassy in Accra says it cannot grant visa to Derrick Amable, 22, to undergo brain tumor surgery without an assurance from the medical provider. When contacted for further clarification on the issue which had been earlier reported by The Ghanaian Times, Ms Mary Daschbach, Information Officer of the US Embassy, declined to comment on this specific case in line with the Embassy’s visa policy, but said that “under the general medical cases, we need assurance from the medical provider that the care will be of no public charge.” She said that, “by law, the embassy cannot issue a visa where there is no assurance that it will not be of public charge, or that it will not be charged to the taxpayer.” Pressed further to find out what the embassy would do in view of the deteriorating condition of Derrick, Ms Daschbach maintained that the embassy could not comment on specific cases. She said that the embassy would only revisit the case and review its decision if it received an assurance from the medical providers. It is known that Derrick’s uncle, who is a physician and auntie, a nurse, both resident and working in the USA, have accepted to pay for the treatment in the USA. The decision not to grant him visa to undergo the surgery had delayed his treatment. Consequently, Derrick is now blind, paralysed and experiencing excruciating abdominal pain. He can hardly sit upright because of pains in his spinal cord and continued to be confined to bed and therefore, unable to take care of himself.

Reacting to the embassy’s position, Stephen Amable, Derrick’s father who was close to tears appealed to the government and individuals to assist him to get the necessary treatment for his son. He said that “the boy is no longer eating and is only surviving on water. “I feel that anything can happen to my son at any moment. I appeal to everyone to assist in saving my son’s life at this critical moment,” he said.

In the paper’s publication, it had stated that an official who handled Derrick’s application and refused him the visa, only wrote: “we need assurance from the hospital that the patient will be given all required care and after care at no public expense.” Derrick was diagnosed of suffering from brain tumor at the University of Ghana Medical School in January 2001. Dr T.K. Dakurah, Neurosurgeon of the Department of Surgery concluded in a report after carrying out his investigation on Derrick, that, “he needs surgical decompression of tumor if he is to survive.” The report further said that, “unfortunately, this operation cannot be undertaken at the Korle-Bu Hospital in Accra. Based on this report, Amable sought the assistance of Professor Benjamin Dodoo and Ms Gifty Kotey, uncle and auntie respectively of Derrick to assist in getting treatment for his son in the USA. In spite of an undertaking and a current financial statement in support of their preparedness to pay for the expenses, the American Embassy still refused to grant Derrick visa. Missions in Ghana