9 Charged For Murder Of Ya Na 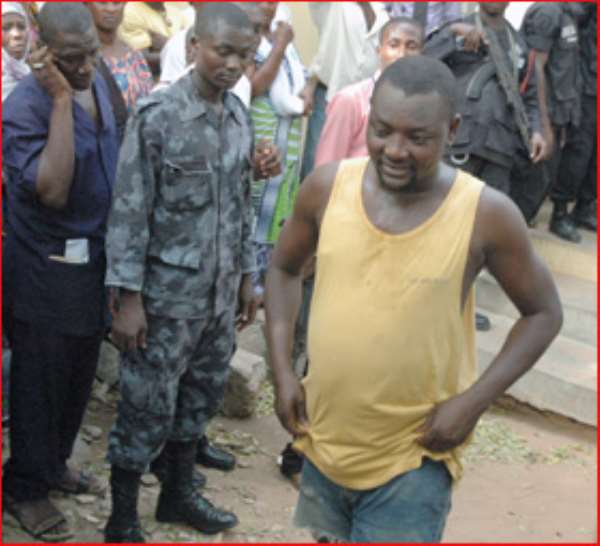 Nine persons including some elders of the Abudu Gate of Dagbon, who were arrested last Saturday, were yesterday arraigned in connection with the murder of Ya-Na Yakubu Andani II.

They are yet to be charged with conspiracy and murder while Sugri is supposed to be charged additionally with unlawful military training.

The facts of the case were read by the Acting Director for Public Prosecutions (DPP), Gertrude Aikins, while the case has been adjourned to May 5, 2010.

Mbadugu, who is believed to be in his 80s, looked very frail and was said to be diabetic. The trial Judge therefore asked that he be given special care and medical attention.

Presenting the facts of the case, Ms Aikins told the court that Yendi, the traditional capital of Dagbon, has two gates from where chiefs are installed rotationally.

She said before the overlord of Dagbon was installed, there was a chieftaincy dispute and a committee which was set up to investigate said Ya-Na Andani, father of the late chief, had the right to rule, based on which he was installed.

According to her, after the installation of Ya-Na Yakubu Andani II following the death of his father, the Abudus saw him as an obstacle to them burying their father, Ya-Na Abudulai, at the Gbewaa Palace, because he was said to have opposed such a move.

The acting DPP said anytime there was an occasion, two persons acted as overlords of Dagbon - the late chief and another person from the Abudu Gate.

Ms. Aikins said in March 2002, the people of Yendi were getting ready to celebrate the fire festival the following month when secret meetings were held in the town, adding that there were strangers in the town at the time.

She said that there was a proposal that the festival be postponed to forestall any disturbances which might erupt in the course of the festivities, so the security forces went to the Ya-Na to give him protection but he turned them away.

She said on March 25, 2002, a fight erupted in Yendi and 30 people were killed including the Ya-Na and later Yidana. Some persons were arrested in connection with the offence but later freed.

The DPP, who described the trial as “emotionally traumatic by all standards”, prayed the court to have the accused persons remanded for further investigations, as their release could interfere with the work of the National Security apparatus.

Counsel for the accused persons, Atta Akyea, said the accused persons were poor people who could never interfere with the work of security operatives and described the trial as “an exercise to fulfill the National Democratic Congress (NDC) promise” and that it would seriously violate the human rights of his clients.

He said Sugri had been arraigned and released for lack of evidence; but was being arraigned again for the same offence.

He intimated that the suspects would make themselves available to the court as and when needed; so prayed that they be granted bail.

Abubakari Abdulai, who is also counsel for the suspects, noted that the way and manner they were arrested did not augur well for Ghana under a constitutional rule and said some were even praying when they were arrested.

According to him, even when persons are convicted, their humanity is preserved, to which Ms Aikins said if they were arrested under such circumstances, it was unfortunate because their dignity should not be undermined.

Another counsel for the accused persons, Kwame Yankyira, complained that some of them were kept there without access to counsel and noted that the arrest of their clients was in line with the President's promise to re-open the case and the Attorney-General's pledge to jail some persons.

The acting DPP was quick to defend her boss, saying that whatever Betty Mould-Iddrisu said did not matter because it is only the courts that have the power to jail and nobody else.

Outside the courtroom, a crowd of persons suspected to be from the Abudu Gate besieged the entrance of the court, giving security personnel a hard time sending the accused persons away.

They jeered at the police as the suspects were led away, with some of the youth swearing that Dagbon would burn if the NDC went ahead with what they described as a political trial.

Meanwhile in Tamale, the High Court has also remanded two suspects who were among the 41 persons picked up in Yendi at the weekend by National Security operatives, as a first step in apprehending and prosecuting the murderers of Ya Na Yakubu Andani II.

Mohammed Baba and Abdulai Osman were charged for illegal possession of locally manufactured fire arms during the swoop in Yendi at dawn on Saturday April 9.

The case was presided over by a High Court Judge, His Lordship Charles Gyemfi and they are to re-appear in court on April 26.

The locally manufactured fire arms were tendered as exhibits during the court sitting.

The case involving six other suspects who were picked during the rampage at Yendi Market on Sunday could not be heard in court because they were deemed as minors.

Agbe Cockra, a representative of the Attorney General's Department, sought permission to contact his superiors in Accra before their fate could be determined.

The other suspects including Labaram Sofo, Abubakari Alhassan, Mahama Osman, Abubakari Armiyao and Alhassan Iddi told Citi News that they were brutally beaten at the time of their arrest.

They therefore sought medical care and it was established in court at the time of their trial they could not engage the services of a lawyer to defend them.