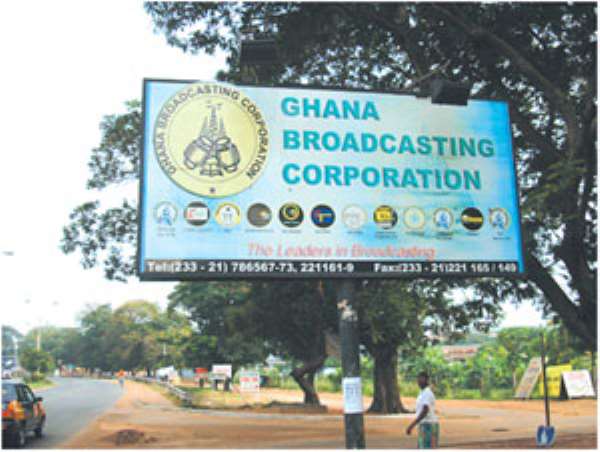 The directive from the Serious Fraud Office (SFO) that the Director-General (D-G) of the Ghana Broadcasting Corporation (GBC) should be interdicted, to pave way for investigations into alleged financial malfeasance at the state broadcaster, has set the executives of the local workers union and the chunk of the workers on a collision course.

Whilst the former insists that the Director has done nothing wrong and must stay at post, the majority of the workers, who spoke to reporters, insist that Mr. Ampem Darko must go.

According to the staff, Mr. Ampem Darko and his colleagues, like any other Ghanaian, must obey the laws of this country, by stepping aside and adhering to the recommendations of the SFO, to allow further investigations into the alleged financial malfeasance.

But, the local union, at a news conference held in Accra yesterday, and addressed by the Union Chairman, Mr. Luis Darko, protested against the interdiction of the D-G and three other directors, who they described as core management staff.

The union executive argued that the procedure adopted by the Board Chairman, Prof Ahetor, to report the directors to the SFO for investigations into alleged financial improprieties, without either complaining to the National Media Commission (NMC) or sitting them (directors) down for an amicable settlement, was very wrong.

Darko kicked against Prof Aheto's announcement of the interdiction of Mr. Ampem-Darko and the three directors.

The leadership of the union workers, who wore red bands at the news conference, argued that the Board Chairman had no constitutional mandate to fire the D-G, but rather the NMC, and that if the latter announced the interdiction, they would accept it.

Mr. Luis Darko therefore sees the approach by Prof. Ahetor as witch-haunting, and nothing else.

Mr. Luis Darko told the newsmen that they would resist any attempt by the Board Chairman to get rid of the D-G and others.

He said that since the new GBC Board assumed office, they, as union members, were not happy with the way and manner they had handled issues at the state broadcaster, citing an example where the Board Chairman went and attacked the newsroom when a little hitch occurred there.

According to the Union Chairman, the current members of the board of GBC have turned themselves into a micro-management, adding, “the board has a role to play by ensuring that GBC is transformed financially, and in a better position itself to serve the nation.”

He was of the view that the role of the GBC Board was not to interfere in management issues, but come out with sound policies for the management to implement.

The Union Chairman also accused the Board of creating division among staff of GBC, which according to him, does not augur well for a state broadcaster like GBC.

Most of the staff, who refused to wear the red band provided by their leadership, also told The Chronicle that the four directors must go to ensure non-interference in the investigations, saying “what the Union executives are doing is to prevent the D-G from leaving GBC, because they had benefited a lot from him.”

They alleged that all the union executives had received car loans from the management, and because of that, they would do all they could to prevent the board from carrying on its legitimate duties.

The staff hinted The Chronicle that they thought their union leadership could raise red bands when their March salaries had not been paid.

According to the staff, it was wrong for the union leaders to tell the whole world that GBC staff were against the removal of the D-G.

The Divisional Commander later told The Chronicle that the union leaders had agreed that they would not go on with their intended demonstration.

Meanwhile, Zambaga Rufai Saminu has quoted a staff in Sekondi as saying that that the brouhaha surrounding the interdiction of Mr. William Ampem Darko and the other three senior officials of the state owned media house, was very legitimate, provided the Serious Fraud Office (SFO), which is investigating the financial impropriety case against the officials, has followed due procedure.

"If it is constitutional, they (SFO) can go ahead with their investigations. If they think he should go for investigation, why not, he can go and come back," he said, in apparent reference to the Director-General.

The source, who was commenting on the confusion that had engulfed the state owned broadcasting corporation, following the order from the SFO to interdict Mr. Ampem Darko, however suggested that other channels, such as reporting the conduct of the culprits to the National Media Commission (NMC) to help them (SFO) to investigate the matter, must also be explored.

In another development, information reaching The Chronicle indicates that directors of the National Media Commission (NMC), after a marathon meeting yesterday, have requested the Board of Directors of the state broadcaster to withdraw its allegations of malfeasance against its Director-General, Mr. William Ampem Darko, from the Serious Fraud Office (SFO).

It again ordered the Board of Directors to resolve its issues with the embattled Director-General amicably.

But, Mr. Justice A. Y. Tsar, Acting Executive Director, on behalf of the SFO boss, speaking on Joy News downplayed reports that his outfit's action was orchestrated by the government.

According to him, an investigation into the alleged malfeasance by Mr. William Ampem Darko and four others was started about a month ago, and was based on media reports.

“Our action was not under anybody's instigation. I find it very funny when people say that we are being manipulated by some big men in government,” he was quoted as saying on Joy News.

He also expressed shock over the behavior of the Director-General when his men were on the grounds investigating the case.

“If you are investigating a place, and there is somebody there who can threaten officers looking for information, then there is a problem. William Ampem Darko said in front of our officers that who born dog at GBC to give us information,” he noted on Joy News.

Asked if the NMC decides not to allow William Ampem Darko step aside to pave way for investigations, he noted “when we get to the bridge, we shall cross it. At least Ghanaians will then know what the NMC stands for, and they will make their own judgment.