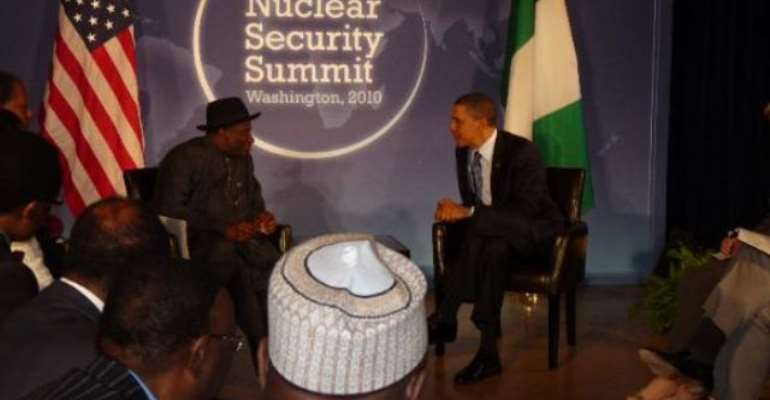 US President Barack Obama has pledged United States commitment to work with
Nigeria in the area of electoral reforms, security, and fight against corruption.

President Obama stated this while meeting with Nigeria Acting President Goodluck
Jonathan in the white house ahead of the Nuclear Security Summit holding in
Washington, DC.

He stressed the need for Nigeria democracy to succeed because of the country's
critical roles in Africa. President Obama also expressed appreciation for the strength
Nigeria has shown in holding on to its democracy in the midst of recent leadership
crisis capable of truncating its democratic process.

In his response, the Acting President Goodluck Jonathan congratulated President
Obama on his success in pushing for the passage of the health reform bill, a
commendation that President Obama was happy about.

Jonathan thanked the United States for standing by Nigeria during the recent crisis in
country. He promised to ensure a free and fear elections in 2011 stressing that
electoral reform is critical to building a solid democracy.

On Abdul Umar-Mutallab, the underwear bomber, Acting President insisted that the
action of the 23 year old Nigerian does not reflect the thinking of Nigerians. He
promised that Nigeria will continue to support America in the global fight against
terrorism.

Jonathan also thanked Obama for supporting the amnesty program of the federal
government saying Nigeria is committed to ensure the success of the program.

The summit is to enhance international cooperation in preventing nuclear terrorism, a
danger that Obama described as "the single biggest threat to U.S. Security, both
short-term, medium-term and long-term…this is something that could change the
security landscape of this country and around the world for years to come."

The Acting president Goodluck Jonathan will today (Monday) hold discussions
session on ''Good governance in Nigeria'' at the Council on Foreign Relations (CFR)
in Washington DC at 7:45 am US Eastern time.