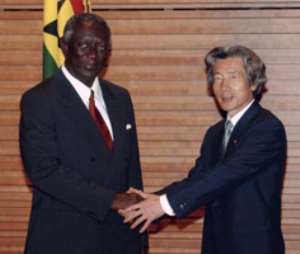 President Kufuor stresses educatioVisiting Ghanaian President John Kufuor stressed that intellectual support from Japan to Ghana is as important as financial aid to help develop competitive education programs. Kufuor arrived in Japan on Sunday for a five-day visit, during which he hopes to deepen relations between the two countries that developed following the visit to Ghana by internationally renowned Japanese bacteriologist Hideyo Noguchi, who died of yellow fever while studying the disease in Accra in 1928. In an interview at a Tokyo hotel Monday, the President said Japan was "proof" that education is the key to "widening prosperity, "referring to the economic and technological developments Japan has enjoyed as a result of its high educational standard. However, Kufuor also said one of the biggest challenges facing his nation is balancing the level of education with the high population growth rate. The high rate is currently about 3 percent a year. "Knowledge and technology have no boundaries," he said. "We expect that Japan will come to share its advanced technology with Ghana." Earlier in the day, the president made a speech at Nihon University in Chiyoda Ward, Tokyo. Here he stressed the importance of education stability not only in Ghana but also to other regions in Africa. In the speech titled "Education and the New African Order," Kufuor said education is, "the tool that connects talented people." He also called for help to realize a "more organized education system for further economic development in Ghana." Nihon University and the University of Ghana concluded an agreement in January to promote academic exchanges between students and professors from the two institutions. Meanwhile, commenting on the recent rebellion in neighboring Cote d'Ivoire, the Ghanaian president said the stabilization of that nation was important not only to Ghana, but also to other parts of Africa, especially in terms of protecting investment opportunities. Prime Minister Junichiro Koizumi hosted a dinner for Kufuor on Monday evening.