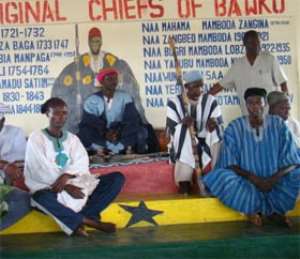 THE LEADERSHIP of Mamprusis in the Bawku Municipality has described as irresponsible the comments of the Information Minister, John Tia that the hands of the financiers of the T-shirts, which were meant for the Damba festival on March 20, 2010, were dripping with blood.

They said Hon. John Akologo Tia's comments on the Bawku conflict at the recent press conference in Accra were one sided, stressing that his choice of words was a recipe to incite the Kusasi youth against Mamprusis, which would not auger well for the area.

“If he thought the T-shirts were bad and so condemned them, then he should have been fair to the nation and condemn the gunshots on the 20th of March, 2010, which were meant to ensure that Mamprusis did not celebrate the Damba nor wear the T-shirts.

The Mamprusi leadership disclosed these at a press conference at the Zangbeo Palace at Natinga over the weekend.

A statement, which was read on behalf of the Mamprusi Regent, Alhaji Ibrahim Adam Zangeogo, said there was nothing provocative on the T-shirts except traditional facts which could be cross-checked, adding that the Kusasis only want to suppress Mamprusis for which reason they were claiming that the T-shirts were creating tension in the area.

“Unfortunately, government and its machinery have accepted these lies as the gospel truth without considering the side of the Mamprusis.

“The Kusasis, led by the Bawku Naba, do not want people to know the truth and wish that the chieftaincy history of the area would be rewritten.

“Bawku Naba Asigri Abugragu Azoka II succeeded in deceiving some quarters that the inscription at the back of the T-shirt, “Original Chiefs of Bawku, was intended to ridicule him.

There are also comments circulating in this municipality that by printing original chiefs of Bawku behind the T-shirts, Mamprusis meant to say that Bawku Naba Asigri Abugragu Azoka was fake.

“Even from the dictionary, original and fake are not the same. Original chiefs is just to tell the history of chieftaincy in the Bawku Traditional Area since 1721 when Naa Ali Atabia was enskinned as the chief of Bawku.

“If the inscription on the T-shirt was a problem some interpretation can be sought and not to demand its withdrawal from public or attack people who wear it,”

Alhaji Ibrahim Kolbilla said this in response to a question posed to him.

It was written under the heading, “ORIGINAL CHIEFS OF BAWKU.”

The front of the T-shirt has a picture of Naa Adam Zangbeo Tampuri, who is referred to as the 14th chief of Bawku by the Mamprusis.

According to him, Mamprusis in Bawku have always celebrated Damba in a manner that did not need security protection nor attract media attention.

“It is outrageous therefore to have heard the Kusasi chief saying that Damba is not celebrated by Mamprusis, but Dagombas and other tribes in the Northern Region. This is yet another attempt at twisting the facts and falsifying the exercise of justice and not a show of ignorance on the part of the Kusasi chief.

“Additionally, Damba is observed during ceremonies like wedding and funeral, which is a common thing in Bawku. After a short stay here, you will attest to this fact,” the statement said.

They called for the limitation of political interference in the Bawku conflict and rather allow the impasse to be resolved in a traditional way.

Meanwhile, the ban on the use of motor-bikes in the Bawku Municipality is strictly being enforced by the police and military peace keeping team.

Additional military personnel and vehicles have also been added to the existing ones in the area.