My Head In Danger 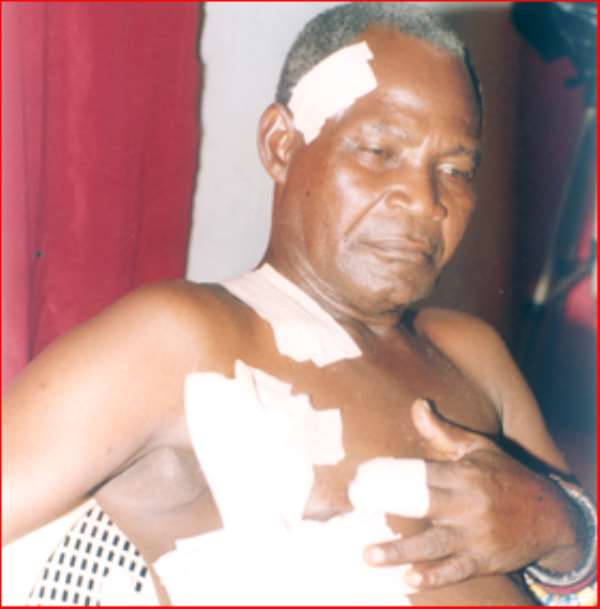 A simmering tension between the chiefs of Aworasa and Asamankese in the Eastern region has reached boiling point, and there are fears the situation may soon degenerate into a bloody war between the two towns.

A number of well-armed strangers have been reportedly bussed into the two towns and some of them occasionally fire bullets into the sky and on the roofs of residents.

At a meeting with journalists over the weekend, an angry Nana Pobi Asamaning, chief of Aworasa, said the tension between him and the Asamankese chief has reached frightening heights and that the latter was scheming to cause mayhem.

“The Asamankesehene has ordered people to kill me and bring my head to him on a plate; one of my men died in the attack and now we see some strangers holding guns and shooting anyhow in this town,” Nana Asamaning noted.

He said one of his elders was sprayed with acid, allegedly on the orders of the Asamankesehene.

The Aworasa chief, Nana Pobi Asamaning and the Asamankese Chief, Osabarima Kwaku Amoah, according to reports, have been wagging accusing fingers at each other with regard to the wrongful sale of the Okyeman customary lands.

The Odikro of Adeimbra No.2, Baffour Kwadwo Abbam, who is loyal to the Aworasa chief, was recently ambushed at night and seven bullets pumped into his body by people who warned him to stop following the Aworasa chief to sell Okyeman customary lands.

Baffour Abbam told DAILY GUIDE that he was rushed to a clinic and the bullets removed from his body and that after he managed to cause the arrest of the attackers, the Asamankesehene allegedly intervened and succeeded in getting the police to release them.

“The persons who attacked me belong to a particular political party and they have since not been arrested again. I know them but I do not have another huge (amount of) money to organize the Regional police to re-arrest them,” Baffour Abbam explained.

The angry chief further hinted that some government appointed persons in authority have taken sides in the matter for political reasons, and so they usually put pressure on the Police to reduce the matter to a simple land litigation case.

When DAILY GUIDE called on the Asamankesehene, Osabarima Kwaku Amoah, at his palace to get comments on the allegations leveled against him, he declined to speak to the paper.

Journalists from other media houses who were at the palace to see the chief over the same matter were asked to wait on the compound.

After a long wait, an elderly man at the palace, whose name was given as 'OS', explained to the journalists that the chief was busy with other matters, thus he would not attend to them no matter how long they waited.

'OS' also said he was not ready to give out the chief's telephone numbers so that the journalists could contact him later.

The journalists were later ordered to leave the palace and never return to interview any person over the matter.

The Aworasa and Asamankese chiefs, according to reports, have been trading accusations and counter accusations in the matter.

The Aworasahene has produced an appointment letter signed by the Okyenhene, Osagyefuo Amoatia Ofori Panin, making him Chairman of the Okyeman Customary Lands Secretariat, and the one to oversee the sale of lands within that jurisdiction.

It is my resolve to get things done right; that is making him call for my head and attack my people,” the Aworasahene noted.