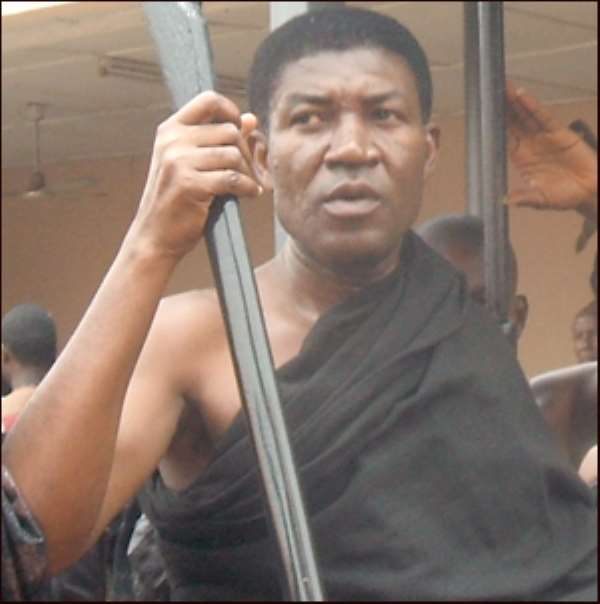 THE TIMELY intervention of the Brong-Ahafo Regional Police Command last Friday night averted a near bloodshed and gun battle at Techiman, when news broke out that the Omanhene of the area, Oseadeeyo Akumfi Ameyaw IV, had been arrested and was pending immediate prosecution.

The Director General of Police CID, DCOP Frank Adu Poku, at a press conference on Friday, disclosed that Nana Akumfi Ameyaw and six others had been busted by the police for allegedly kidnapping the chief of Tuobodom, Nana Baffuor Asare II and his secretary on March 5.

Sources close to the regional police command told DAILY GUIDE that had the police not been proactive enough, by quickly deploying men to the municipality to patrol the area after the press conference, loyalist of the chief would have taken the law into their own hands and caused mayhem in protest of the said arrest.

According to our sources, when residents heard that Nana Akumfi Ameyaw had been arrested, they thronged the chief's palace to verify the authenticity of the news, and when they saw that the chief was still around, they then armed themselves to guard the palace to prevent any security agency from effecting his arrest.

The sources however hinted DAILY GUIDE that the regional police command had not carried out any arrest of the Techimanhene.

They were for that matter highly disturbed to have heard the CID boss announce it at a press conference.

“The announcement of the chief's arrest nearly created havoc in the town. We are the people on the ground and have not gone to his palace (Nana Akumfi Ameyaw) to cause his arrest.

Again, we have not sent any of such reports to Accra about his arrest,” one of the sources maintained.

According to our investigations, the regional police command, after the Independence Day eve clashes at Tuobodom, which was as a result of  the kidnapping of the Tuobodom chief and eventually led to the death of three, went to the Techimanhene's palace and took a cautionary statement of the Omanhene and has since sent the report to Accra.

However, on Friday, the Director General of Police CID put on public record that the paramount chief and four other sub-chiefs, namely Nana Stephen Akumfi Ameyaw, elder brother of the Techimanhene, Nana Opoku Abankwa II, Krontihene, Nana Opoku Fosu Gyeabuor, the Mawurehene, and Nana Barima Obeng Ameyaw, the Akyempimhene and chief of one side of Tuobodom, including two bodyguards, Prince Yaw Dua, 29, Banabas Atamekye alias Seidu, 31, had been arrested.

The CID boss said the chief and his men had been granted police enquiry bail and would soon be put before court to face criminal charges.

“They have all been cautioned and charged with the offences of kidnapping, assault and stealing and have been released on police enquiry bail,” he said, adding that a docket has been prepared and forwarded to the Attorney General for advice and possible prosecution.

However, Abubakar Ameyaw-Akumfi, Press Coordinator of Techimanhene and son of the chief, has denied knowledge of any charges or prosecution against the chief by the police.

Mr. Ameyaw-Akumfi, who has accused the police of 'hypocrisy', has told a section of the media that instead of the police prosecuting the alleged perpetrators of an earlier assassination attempt on his father two years ago, they have rather turned around and are prosecuting the victim, stressing the police were being economical with the truth and that they were waiting for them to effect any arrest in Techiman.

It would be recalled that three people were shot dead at Tuobodom on March 5, 2010, while several others sustained gunshot wounds during a gun battle at Tuobodom, after the chief of the area was abducted at the Wenchi High Court premises by people said to be bodyguards of the chief of Techiman over a long-standing chieftaincy standoff.

Reports indicated that the Tuobodom chief was stripped naked and beaten up by his kidnappers. The Asantehene, Otumfuo Osei Tutu II, waded into the controversy and threatened to also kidnap the Techimanhene if government failed to take action against the perpetrators.