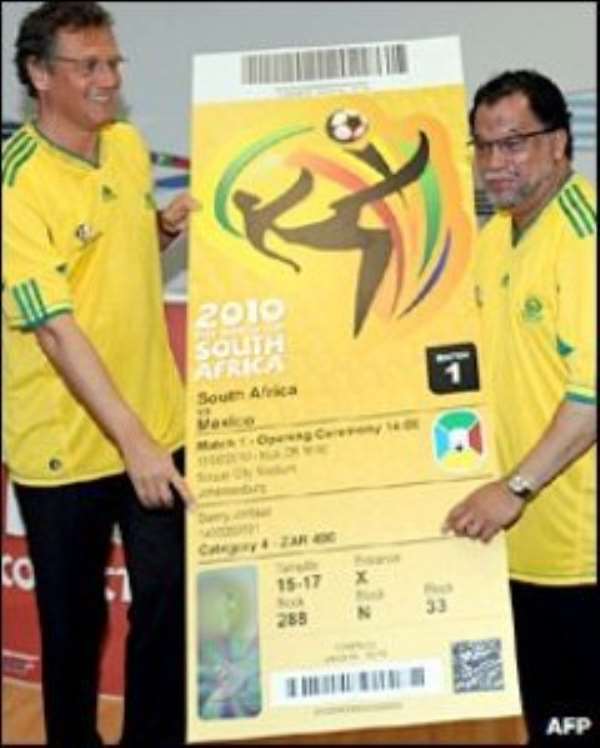 
Football's world governing body has launched a new drive to encourage local fans to buy the 500,000 unsold tickets for this summer's World Cup.

With two months until the start of the tournament, tickets are still available for every match except the final.

Organisers have admitted the initial reliance on internet sales was not the most "friendly" system for local fans.

"We want to ensure the picture we give to the world is full stadiums," said Fifa secretary-general Jerome Valcke.

Demand from visiting fans has been lower than originally anticipated, with a "significant number" of tickets being returned, including those from corporate sponsors.

The effects of the global recession have been partly to blame, while fears of crime have also contributed to the relative lack of travelling supporters.

Officials have blamed the cost of long-haul flights to South Africa, while the government has launched inquiries into both accommodation costs and alleged domestic airline price fixing.

And with most fans in South Africa in the habit of buying tickets on match day, Valcke admitted the emphasis should have been shifted away from internet sales at an earlier stage.

Reports suggest that less than half of the population in South Africa has access to the internet.

"The approach at the beginning was not the most friendly system for South Africa and South Africans. But there is always time to learn - 62 days [before the tournament] is a long period," Valcke said.

The final phase of ticket selling will see 11 new centres in the nine host cities where fans can buy tickets "over the counter".

"We have always said that it is important that we make this World Cup more accessible to the [South African] people and with the over-the-counter sales, we believe this is a measure that is consistent with the needs of the fans," said tournament chief executive Danny Jordaan.

"If we do have empty stadiums, it will reinforce the idea that football is not supported in the country and that would be tragic.

"The reality is that this is a football-mad country."

More than 100,000 tickets will be available exclusively to South Africans for $20 (£13), the lowest World Cup price for many years.

About 2.2m tickets have been sold have already been sold, with the United States somewhat surprisingly heading the list of overseas buyers with 118,945 tickets. British fans have bought more than 67,000 tickets.

But in Germany, only 32,269 tickets have been sold and Valcke admitted that sales in Europe have been "disappointing".

"Maybe we are getting too much [football]," said Valcke.

South Africa has poured 33bn rand (£2.9bn) into preparations for the tournament. Major upgrades to airports in Johannesburg, Cape Town and Bloemfontein are complete, while Durban's new airport is set to open on 1 May.

The country is also trying to reassure fans about security in a nation with one of the highest crime rates in the world, averaging 50 murders each day. An extra 41,000 police have been recruited for the tournament.