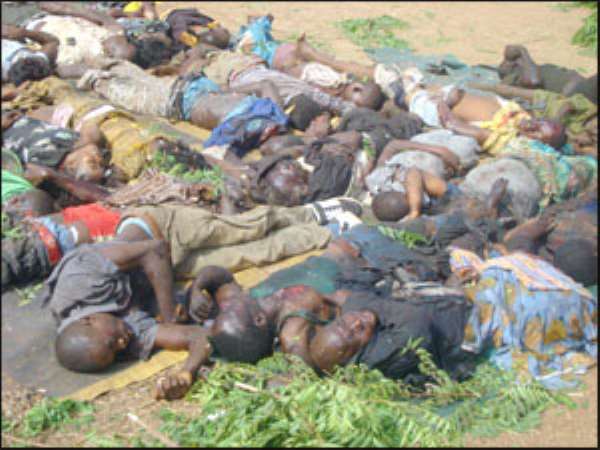 
Twenty eight people died in two separate accidents at Attakrom, near Kintampo in the Brong Ahafo Region, and Asenema, near Adukrom in the Eastern Region, last Saturday.

At Attakrom, a village between Babatokuma and Dawadawa; 16 people, including a child under one year, died on the spot and seven others later at the Kintampo Government Hospital.

The accident occurred when two 207 Benz buses on which they were travelling collided on the main Kintampo- Tamale trunk road.

Those who sustained various degrees of injury are on admission at the same hospital.

The Kintampo District Police Commander, Deputy Superintendent of Police (DSP) Desmond Owusu-Boampong, who briefed the Daily Graphic Sunday indicated that while the bus with registration number AW 2370 Q was moving from Tamale to Techiman, the other, with number AS 472 V, was on its way from Techiman to Tamale.

According to him, the accident occurred about 7.30 p.m. on Saturday when the Techiman-bound vehicle was overtaking a tractor, in the process of which it collided with the other vehicle.

He explained that the decision to transport the 16 bodies to the Sunyani Hospital was due to the bad state of the Kintampo Hospital mortuary, adding that the five bodies being kept there were to be embalmed immediately.

When the Daily Graphic visited the Sunyani Hospital mortuary, we counted about nine bodies out of the 16, including a female, while the mortuary attendants were in the process of preparing them for autopsy.

Scores of people believed to be relatives of the deceased were identifying the bodies of their relations, while some sympathisers had grouped in front of the hospital gate.

A young lady, who was wailing uncontrollably, claimed that her mother had been involved in the accident.

A medical officer who declined to mention his (doctor's) name indicated that the bodies had been brought in at dawn Sunday.

In the second accident, five people were killed in a grisly accident when a Daewoo bus belonging to the Ghana Grid Company Limited (GRlDCO) ran into a Nissan Urvan bus at Asenema, near Adukrom in the Akuapem North District on Saturday.

Two persons died on the spot, while three others later passed away at the Eastern Regional Hospital in Koforidua.

Ten out of the 38 injured people on board both buses who were rushed to the hospital were admitted and are responding to treatment, while the others were treated and discharged.

The 10 on admission, including a 16-year-old mother, Flora Nyarko, and her 13-month-old baby, were among the 12 passengers on board the Nissan mini bus, with registration number ER 435 S, travelling from Koforidua to Adukrom.

Those whose bodies have so far been identified at the morgue of the Eastern Regional Hospital include Kingsley Annor, the driver of the Nissan mini bus, Yaw Kono and Dorinda Kono.

The accident occurred about 3.30 p.m. on Saturday when the GRIDCO bus, which was travelling from Larteh to Prestea in the Western Region with about 25 mourners, veered into the lane of the oncoming Nissan mini bus.

The driver of the GRIDCO bus, who was allegedly said to be descending the curvy and hilly road in a high gear, veered into the lane of the mini bus in a bid to avoid running into a trench along the road but ended up running into the oncoming vehicle.

The GRIDCO bus, with registration number GW 5613 T, dragged the mini bus about 10, metres into a trench in the curve, mangling the Nissan bus in the process.

The passengers on board the GRIDCO bus, comprising workers of the company and some Jehovah's Witnesses from Prestea, had attended the funeral of the father of a staff member at Larteh and were returning to Pres tea when the accident occurred.

Briefing the press on the accident, the Eastern Regional Director of the National Road Safety Commission (NRSC), Mr Stephen Anokye, said preliminary investigations into the cause of the accident revealed that the driver of the GRlDCO bus had been descending the steep road in a high gear.

"In his bid to avoid running off the road, the driver of the GRIDCO bus possibly lost control of the bus and, therefore, went into the lane of the oncoming Nissan bus, resulting in a head-on collision," he stated.

"This tragic accident could have been avoided if the driver of the GRIDCO bus had exercised extreme caution and observed the road signs while descending the hill," he added.

Mr Anokye advised motorists who used the mountainous Koforidua-Adukrom road not to ignore the various road signs erected along the road, saying that "strictly abiding by these signs can help reduce accidents on the road".

For his part, the Akuapem North District Chief Executive, Mr George Opare-Addo, who visited the scene of the accident, appealed to motorists to avoid speeding and drink driving in order to save lives on the road.

You disappointed Assin North MP, you abandoned him in court ...
37 minutes ago