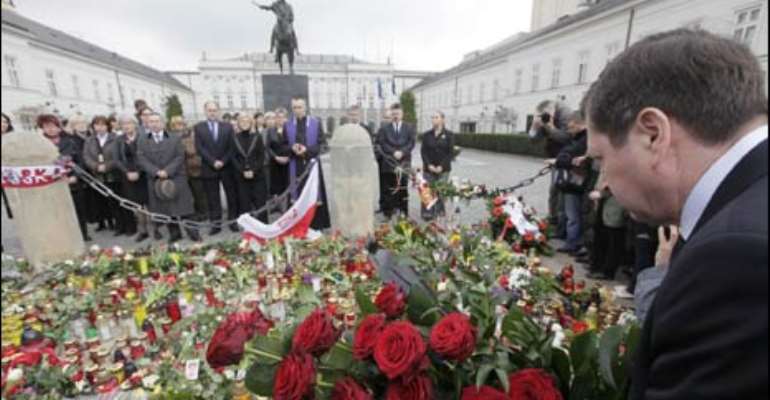 Poland has held a two-minute tribute, with church bells and police sirens, to honour President Lech Kaczynski and 95 others killed in a jet crash in Russia.

Thousands of Poles have been attending church services and leaving flowers and written condolences across the country.

The president, military chiefs and MPs were due to attend a memorial for a World War II massacre when their plane crashed near Smolensk on Saturday.

Russian officials say the pilots were warned that they were flying too low.

Mr Kaczynski's body is due arrive in Warsaw later, as the country begins a week's mourning.

The brothers' strong nationalist, conservative agenda divided opinion in Poland, but the BBC's Adam Easton in Warsaw says the president's supporters and opponents have joined together in paying tribute to him.

Boguslaw Staron, a 70-year-old from Warsaw, described Mr Kaczynski as "a great patriot".

"He taught Poles how to respect our traditions, how to fight for our dignity, and he made his sacrifice there at that tragic place," he said.

Poles gathered in town squares and in the streets at midday (1000 GMT) and stood silently to mark the tragedy, as church bells rang and emergency sirens wailed around them.

The president had been flying to Russia along with his wife, the heads of the army and navy, MPs and senior historians to mark 70 years since Soviet forces massacred more than 20,000 Poles near Katyn.

No-one survived the crash.
Russia has declared Monday a day of mourning and Russian Prime Minister Vladimir Putin, who visited the crash site with Polish counterpart Donald Tusk, said he would oversee the inquiry.

Russian and Polish investigators have recovered the flight-data recorders and are carrying out a joint inquiry.

They are looking into the possibility that pilots ignored warnings that they were approaching Smolensk too low.

Experts have also suggested that the age and condition of the Polish president's Soviet-era Tupolev 154 plane could have played a part in the accident.

Witnesses have described seeing the plane's wing hitting treetops in thick fog before it came down in a forest.

Mr Kaczynski was a controversial figure in Polish politics.

He was active in the Solidarity movement that helped bring an end to Communist rule, but later fell out with Solidarity leader Lech Walesa.

As president, he held fewer powers than the prime minister but retained a significant say in foreign policy. He could veto new laws and frequently blocked government reforms.