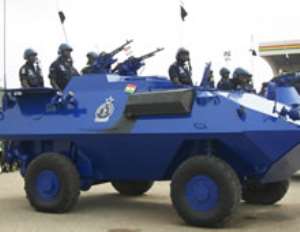 
The police in Yendi have dispersed crowds of Abudu youth who amassed to hold a press conference in connection with the arrests Saturday of some of their elders.

The police say the group did not inform them earlier of their intention to hold the gathering.

Police swooped about 41 people Saturday morning as part of efforts to find the killers of Ya Na Yakubu Andani in 2002.

After screening, six of them were transferred to Accra for further investigations and possible prosecution.

Thirty-three of the suspects were given self recognisance bail while two persons in possession of two locally manufactured guns have also been detained by the Yendi police and would be arraigned before court for possessing weapons without authorisation.

Since the arrests yesterday, tension has been mounting in the Northern Regional town.

Joy FM's Northern Regional Correspondent Mahama Shaibu reports of gunshots in Yendi as the security personnel are on red alert and move to disperse any gathering in the area.

The angry Abudu youth reportedly set ablaze a shop belonging to the Yendi Municipal Chief Executive, Imoro Walvis when they were stopped from holding their press conference by the police.

The torching of the shop invoked fear in traders who had gone to the market to do business and who are now fleeing the area.

Security personnel have taken over the market to prevent further destruction of property and to secure people's property.

He said policemen and soldiers have been placed at vantage points to prevent any disturbances.

Yana Yakubu Andani II was murdered in March 2002 with about 22 of his traditional elders during a three-day siege on his Gbewaa Palace in an intractable chieftaincy dispute between the two royal gates, the rival Andani and Abudu gate.

Pressure has since January been mounting on the government to bring the perpetrators to justice in fulfillment of its electoral pledge to find the killers of the Ya Na.

Elders of the Andani gate only last week issued an ultimatum to the government to make sure that justice was done or face protests.