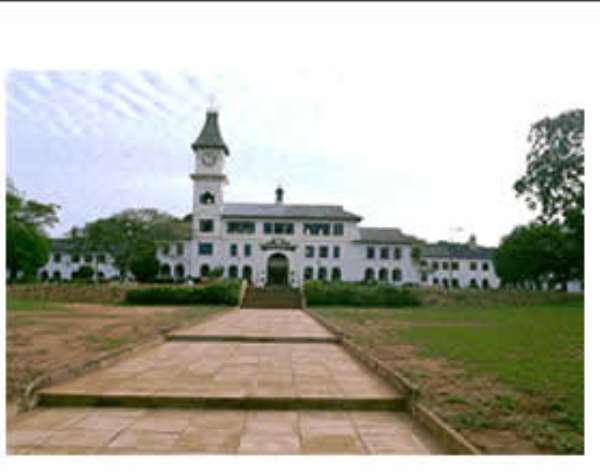 There is an old African saying that you do not use your left hand father's house no matter how dilapidated it is, so what do you do if you want to make fair comment on your alma mater? Maybe you just make the point and ask others to disprove it.

I have been having a discussion with a friend about the future of Ghana and how we can move forward as nation to fulfil Nkrumah's dream of an independent country. After he had posed the question to another friend, he came back to tell me that the failure of Ghana to achieve economic, social and cultural independence must be directly attributed to the failure of Achimota School to fully live up to the expectation of why it was set up.

I could not agree with the statement; i felt that he was been very uncharitable, what with Achimota being topical at present about trying to sell some of its own land to former students, how there was faeces floating in its gutters and the suspected swine flu outbreak in the school. He suggested that it was none of those issues that had prompted this conclusion but the fact of Ghana's failure could be directly linked to the failure of its premier institution to think through new paradigms about developments, to manage the country better and to offer us new leadership that frames the dialectic around self sufficiency after independence.

So, what has Achimota contributed to our development effort?

It provided our first political leader who ruled Ghana from 1957 to 1966, a good nine years with most of the civil and public servants old students of Achimota School. They served Nkrumah very well but soon after the coup, they as technocrats rightly served the military under Accra Academy and Adisadel and the 'Keta secondary old students association'. I asserted that there was no proper political leadership during that military regime; his contention was that the technocrats trained at Achimota were the finest in the land and should have told the military pretenders how best to move the country forward. I pointed out to him that the next leader was from Mfantsipim who have always been 'against people' from the matemeho tendency; his view was that there were more Achimota School experts in the civil and public service and in the cabinet and these Achimota School people should have shown leadership what to do.

Then came military rule again led by Swedru commercial college and Presec but that military era from 1972 to 1979 was concluded by Achimota School.

Another civilian government was established that sought to fulfil the truncated vision of Nkrumah, it was led by Government Teacher Training College but yet again most of the leading lights had attended Achimota School.

But Achimota came back again when it led a coup against the PNP and from 1982 through to 1992, there was no doubt as to who was at the helm of political and military and civil life in Ghana. As before the judiciary, the civil service, the medical services, the engineering services and most public services were led by people who attended Achimota School as had been the case during the colonial government. And Achimota also led the civilian regime that followed that and again led all aspects of government, the financial institutions, the legal institutions and most of the government controlled commercial institutions.

The turn of Prempeh was quite unremarkable but yet again we had Achimota School people propping up the inefficient and the ineffectual government of that period and now we are back to Achimota and still we are failing to grapple with the issues of how an independent country should and must answer the questions about development.

How do we survive as a nation and be self sufficient so that we can pay our own way and finally rid our country of the corruption that is introduce through aid to our country.

I am probably being too charitable but thinking through what my friend, who attended an unremarkable school, Augusco and the other who attended Odasco must be saying about Achimota, it may just be true.

The school trained the brightest in our country to be the hope of the nation. Indeed anyone of note in our country pre and post independence went to Achimota barring some exceptional people who went to other schools. So what happened? Is there something about the school that tried too hard to make people into elitist individuals? was it the school motto that dwelt too much on making people equal that spoilt it for Achimota or was it because Achimota took on the wrong material in the first place and could not mould them well enough to enable them take our country forward.

Or was it the land on which the school was built, a habitat of 'jeimawojin' with its own riddle of 'afoo taatso shi mifo ni miko' to which the reply is 'aatsimota, odonkofoi'

It may be my friends are being too hard on Ghana; Ghana has not failed and if it has it is unfair to blame Achimota School for the mediocrity of our joint Ghanaian efforts.

I forgot to mention somewhere that after I left Achimota School, I attended Ghanass in Koforidua but that has not helped me in assisting to find solutions for the country's problems so I can absolve myself of half the blame for this failure

*Ade Sawyerr** is partner in Equinox Consulting, a management consultancy that provides consultancy, training and research and focuses on formulating strategies for the advancement of black and ethnic minority, disadvantaged and socially excluded communities in Britain. He also comments on political, economic and social, and development issues. He can be contacted by email on [email protected]

Fuel price increases: Akufo-Addo, Bawumia callous about the ...
20 minutes ago

Cape Coast Airport will be constructed at all cost - Akufo-A...
20 minutes ago