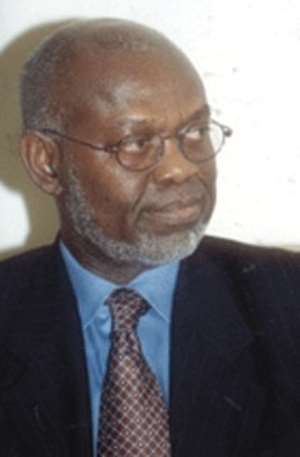 Dr Kwesi Botchwey burst into the head office of the National Democratic Congress (NDC) Tuesday, this week, in a grand style reminiscence of the triumphal entry of Jesus Christ into the city of Jerusalem.

Not quite long after reaching the office, he dished out ¢20m in crisp notes for the payment of the salaries of the 20 staff of the headquarters which had become outstanding for three months. Then the floodgates of euphoria were open.

The Black Mamba was hugged by every single member of staff present, and the ecstatic functionaries queued to give him their word of advice or promise of support.

Chronicle informants at the secretariat say the most critical mark scored by the NDC candidate was a very “successful interaction” he had with the functional executives, after exchanging the necessary courtesies. “If the gap between Prof Mills and Kwesi Botchwey (KB) was wide, I'm afraid, the latter is strategically closing it fast,” was the remark of one of those executive present.

Dr Kwesi Botchwey, the second person from the NDC to declare his intention to fight for the party's presidential slot arrived from the United States (US) two weeks ago. Since then, he has been interacting with the media, his party executives and influential figures.

On his visit to the party office he was accompanied by his campaign manager, Sam Garbah, Dr Mustapha, MP for Ayawaso East, Ohene Ofori, his press liason and a group of well-built men who reportedly trooped after him from the US.

When Dr Botchwey settled down with the executives and staff at the secretariat, he told them he wanted to deepen the democratisation process started in the NDC, hence his decision to view to become its leader. He assured that he and Atta Mills, whom he calls Fiifi Mills, are close friends and he would never hit him “below the belt” during or after the campaigns for the primaries. “I am for a clean and fair campaign,” he was reported to have said.

The sympathetic executives and staff in turn wished KB well but cautioned him to stop publicising the difference between him and the Old Man (Rawlings), even if there are those difference at all. He was further asked to ensure that his followers practice what he preaches so they do not antagonise the followers of Fiifi Mills.

Chronicle inquiries in the regions further indicated that the Kwesi Botchwey-Obed Asamoah campaign machine had started moves to pay all outstanding bills and rents in the constituencies. This is said to be aimed at assuring the footsoldiers that KB is capable of solving the financial problems of the NDC, which finds itself cash-strapped in opposition.

“It is paying off, the boys are falling in love with him because most of them working at the secretariats have not been paid for months and landlords are throwing us out of their rooms like your paper rightly reported,” confirmed one Koforidua regional executive who referred to our lead story of Thursday.

Insiders compare the resourcefulness of KB to chairman Rawlings and Fiifi Mills to Professor Adu Boahen in the 1992 presidential elections. “The truth is that while Botchwey is amply resourced, those bankrolling the former Veep are facing problems, themselves, now,” is how another observer described it- alluding to the constraints the Ahwoi brothers are experiencing currently in their cocoa purchasing business.

Another factor that strengthens the former Finanace Minister is that, through Dr Asamoah, the national chairman, he enjoys the support of all but four of the national executives. Take away Dr Josiah Aryeh, general secretary, Frances Assiam, women's organiser and two deputies and the whole national executive remains under the thumb of Obed, Chronicle has learnt.

And though Botchwey has strategically distanced himself from Obed in order not to inherit his enemies in addition to his own, it is known that the network of the two pals is ticking on the ground. The majority of the national executives in Botchwey's corner are expected to influence most of the five candidates to be picked from each of the 200 constituencies who will pick the between man by 22 December.

Just after that, Lee Ocran, one time NDC deputy Minister for Environment, Science and Technology, is also expected to file his nomination to contest for the most coveted position in the NDC – the presidential candidate.

Though that may surprise may people, Chronicle learnt from its sources that both Alhaji and Lee may throw in the towel at congress and turn in their flock to Prof Mills. Both are Fiifi's sympathisers, anyway.