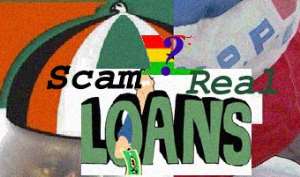 After several months of a fact-finding mission in Europe and America about the much maligned, much criticized and much discredited $ 1 billion I.F.C (International Finance CONSORTIUM) loan package for Ghana the source of the money has been traced. “The Vanguard” traced the sources of the loan through the Internet when a curious observer posted a message on the paper’s website last week. The contracting of IFC historic loan by the Kufour administration has generated a lot of controversy with the opposition NDC’s mouthpiece “Ghana Palaver” describing it as a 419 scam. It also received a lot of media bashing with most journalists questioning the transparency of the mystery cash. Presently, Nana Kofi Coomson, Publisher and Editor of “The Ghanaian Chronicle” who is in London for a year’s study programme, has thrown his searchlight on the seemingly elusive $1 billion package which senior Minister, Hon J.H. Mensah still swears with the Holy Bible that it is a done deal. Almost every prominent personality in local and international banking circles has distanced himself from the IFC. loan. Even the United Nations Organisation, the world’s supreme body that was linked to the facility by the Ghana governments negotiating team quickly dissociated itself from the loan leaving the good people of Ghana guessing whether they are being led to the slaughter table by the NPP government. But “The Vanguard” can conveniently say that the $1 billion loan package is real and lodged in several Banks in Europe and America. Electronic Evidence This is confirmed by a report on the papers website by a consultant of KMG Finance Services of the United Kingdom who disclosed that the IFC booty is part of the over $16 Trillion that has been looted by leaders of the Third World especially Africa and deposited in foreign Banks. “The Vanguard” gathered that the looted cash which is presently kept in the vaults of Banks in Europe, prominently Switzerland, has been remobilized by a consortium of Bankers to offer relief for Third World Countries with extremely soft loan’s to halt their increased demand of their peoples cry for the return of their looted money. “The Vanguard” learnt that the secrecy surrounding the identity of the IFC loan could be linked to the historical linkage between the fund and the missing trillions from the Third World. “Tell the good people of Ghana that the $1 billion loan package is real; there is no fishy deal here. Even if the package is a sham who losses? Certainly not the people of Ghana and their sovereign State because unlike other International transaction, the recipient nation looses nothing if the transaction is scuttled”. The message on this papers website read. Responding to media enquiries about when the much expected $1 billion IFC loan is going to be deposited banks’ vaults Senior Minister J.H. Mensah told a press conference hosted by President Kufour few weeks ago at the Castle that the facility will be due here soon and that due diligent work has been done-Ghanaian are still waiting.