By The Evening News 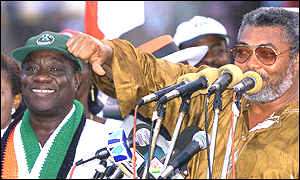 Professor John Atta Mills, former Vice President will no longer stay under the shadow of his mentor, ex-President Jerry Rawlings, should he become the next President of Ghana.

The Prof will be his own man and listen to the Council of State for advice as mandated by the constitution. Joshua Alabi, Greater Accra Regional Chairman of the National Democratic Congress (NDC), said this in an interview with “The Evening News” in Accra.

Explaining further, Alabi said when Prof Mills became the Vice President under the second tenure of Flt.-Lt. Rawlings, he (Mills) could not have displayed all his abilities because he was constitutionally mandated to assist the President.

He said now that Prof Mills would be contesting as the flag-bearer, he would be in the position to prove his ability. He described Prof Mills as “the right man in the wrong party” during the last presidential election.

He contended that, had the NDC not lost its public image because of the long duration in power, Ghanaians would not have rejected Prof Mills for the presidency of Ghana. He noted that the major reason why the learned Prof lost the 2000 presidential elections was because people wanted a change and did not bother about the ability of Prof Mills.

“The perception was that NDC had stayed long in power and not Prof Mills as the candidate of the party,” Alabi who is also a member of the Mills Campaign Team explained. Alabi said the NDC had been re-packaged with a new vision and it was time for its delegates to produce the right product for the market.

Asked about the chances of Prof Mills’ winning the December Special Congress, which will elect the party’s flagbearer for the 2004 general elections, Alabi said it was a one-way traffic for the former Vice President. He predicted that Prof Mills would win over 65 per cent of votes at the congress.

According to him, Prof Mills was streets ahead of his challengers including Dr Kwesi Botchwey, adding that since the race was officially opened, the former Vice President has been touring most constituencies not only to canvass for votes but also to thank NDC supporters for voting for him in the 2000 elections.

Alabi, a former Greater Accra Regional Minister, said Professor Mills had an added advantage of being a presidential material for the party since he obtained 44 per cent of the votes in the last presidential elections. “With this percentage in our stores, all we need to do for Professor Mills is to fine tune for 2004,” he stated emphatically.

The NDC will be going to the polls on 7 December to choose a candidate to lead the party to the 2004 general elections. So far, five candidates have expressed interest to contest the elections. However, only two, Professor Mills and Dr Kwesi Botchwey, have launched their campaigns. Alhaji Iddrisu Mahama is yet to be seen on the campaign trail.