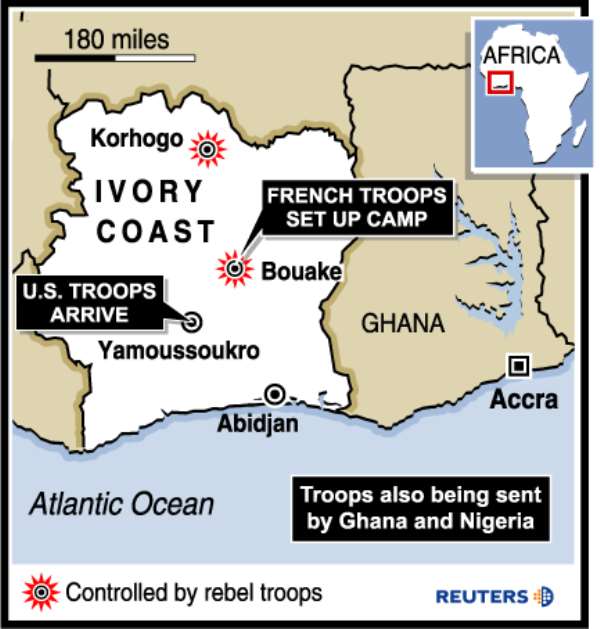 DAKAR, Senegal - Burkina Faso calls it an economic catastrophe. Senegal's bracing for a drop in exports. Ghana's hurting, and Sawadogo Issa says his soap factory is grinding to a halt. Across West Africa, countries and companies are feeling the pinch from a nearly month-old rebellion sowing chaos in Ivory Coast, the region's economic powerhouse. Over four decades of peace, the tropical country rich in coffee, cocoa and palm oil had flourished, opening its borders to millions of migrants from its impoverished neighbors. Seemingly steadied against political and economic upheavals elsewhere in turbulent West Africa, Ivory Coast attracted international companies like Nestle, Archer Daniels Midlands and Cargill. But its reputation was shattered by a 1999 coup that ushered in three years of upheaval. Since the latest troubles, which erupted Sept. 19 when rebels launched a deadly uprising, goods have been piling up at Abidjan, Ivory Coast's commercial center and the region's second-largest port, serving landlocked countries like Burkina Faso and Niger. West African laborers who about now would be harvesting Ivorian cocoa plantations have fled in their thousands. Burkina Faso, an arid Muslim nation to the north, has more than 2 million nationals working in Ivory Coast. Their earnings often support whole families back home. "The eventual economic consequences of the crisis in Ivory Coast will be catastrophic to our country," Seydou Bouda, Burkina Faso's economics minister, said in a telephone interview. Issa, who manages a Burkina Faso soap company, says two of their trucks are stuck in Bouake, Ivory Coast's second city, in rebel hands since Sept. 19. "There is no activity because of the crisis," he said. "Without the raw material exported from Ivory Coast, there isn't much we can do. So we sit around and wait." In Mali, another northern Muslim neighbor, import-exporter Sekou Dramera fears his company's earnings will drop by as much as a third. "We are worried because all our goods are stuck at the port of Abidjan. We are currently considering other alternatives, but it's going to cost us double the price to transport goods via Ghana and Burkina Faso," he said. "Unless a rapid solution is found, things will be much worse." Ghana, to the east, is being hurt by a drop in traffic from Ivory Coast. At Brong Ahafo, a main border crossing, customs agents say the amount of import duties collected has fallen by 90 percent. Ivory Coast is feeling the economic impact, too. Rebels captured a major city in the cocoa belt Sunday. Cocoa businesses there have closed and farmers cannot get to fields to bring in their crops, residents say. Ivory Coast is the world's largest producer of the beans used in chocolate. The International Cocoa Organization has frozen plans to relocate from London to Abidjan, and SN Brussels Airlines is reconsidering its decision to start flying to the city this month. The organizers of an international investment fair slated for November in Abidjan say they cannot confirm whether the event will go ahead. "Several American and French companies have changed their minds and decided to pull out," said Moussa Dosso, the organizing committee's deputy chairman. One of the few optimists is Senegalese President Abdoulaye Wade, who has been involved in efforts to get rebels and the government to sign a truce. "Ivory Coast is the economic driving force of the West African region," he told The Associated Press. "I am convinced that it will soon enjoy a new boom." But others in his government don't sound so sure. "At the moment we do not have a clear picture but considering Ivory Coast's economic influence on the entire West African region, we can only assume that Senegalese exports will be very much affected," said Oumar Sylla, the economic minister's chief of staff.