By The Country Awards Council, Ghana 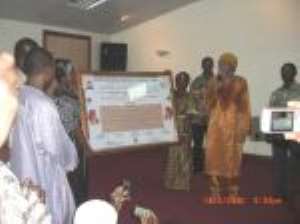 The Country Awards Council Ghana (CACG), a youth, women and children development Non-Governmental Organization (NGO) has awarded the Anointed Spiritual of Israel, H.E Dr Ben Ammi Ben-Israel, LTAAR, FGNAHAF, with Lifetime Achievement Award, “The order of hero's honour of valor and bravery of service to humanity, natural order study and the creation of a new form of humanity in global history” at an impressive ceremony in Accra.

The Award was presented to the Anointed Spiritual of Israel by the Honorary Chairman of the Country Awards Council, Mr. Sam Worentetu who stated that the Award was a special gift to the people of Israel in recognition of their forty years of exceptional service to humanity of which nobody has died in that community.

The conferment of the award also admited H.E. Dr Ben Ammi as a Fellow into the Ghana National Honorary Awards of Fame, An Agency of the CACG.

In a citation, the Country Director of the CACG, Mr. Kobla Asamani described H. E. Dr Ben Ammi as “A born leader, unique, visionary and humane person, a keeper of faith and true African values, an endurer and pace setter, a natural made and a holistic scholar, a keeper and fulfiller of the promise, an eternal asset of beacon of hope and the creator of a new form of humanity, a leaders leader and a heroes hero”.

Mr Kobla Asamani added that H. E. Dr Ben Ammi has helped bridged the gap between spirituality and development like no other leader before in global history, in the process creating new and progressive options for successfully building communities and projects based on enduring righteous, African cultural principles.

“H.E Dr Ben Ammi's involvement in Ghana's development for many years has led to establishment of the African Hebrew Development Agency (AHDA), an NGO which collaborated with the Ghana's Ministry of Health to design and implement the current Regenerative Health and Nutrition Programme, implement Ghana's national health policy and also the fist nation state to make disease prevention a policy all through efforts and under the able leadership of the late Major Courage Quashigah (Rtd), a former Minister of Health in the NPP government”.

Mr. Asamani further remarked that Dr. Ben Ammi also commissioned technicians from the Hebrew community to drill eight water wells in the Volta Region; after Ghana's former President H. E. Jerry John Rawlings lamented that the water in the lavatories of Accra was more suitable than water Ghanaians drink in the rural areas. The Anointed Spiritual Leader of the African Hebrew Israelites in Dimona, further commissioned a delegation of medical and dental professionals to provide free health services to more than 100 Ghanaians in the rural areas, Mr. Asamani stated.

All these projects promote what Mr. Asamani termed as the “Dimona Model” but more accurately reflect in most cases a modern application of many ancient African cultural traditions that are in harmony with the laws of nature.

With these achievements, BBC's “Focus on Africa”magazine in the year 2000 named him the “One of the Most Influential Africans of the last Millennium”.

While, the Israeli media has named Dimona as “An Island of Sanity”, the US Congressional Human Rights Caucus calls Dimona “Miracle in the Desert” and the Israeli Foreign Ministry also calls Dimona “A Phenomena in a land of Phenomena”.

According to the citation, H.E Dr Ben Ammi has effectively implemented solutions against AIDS, crime, destitute, drug abuse, disease prevention, among others for the people of Dimona.

Receiving the award, the 70-years-old African Hebrew Israelite leader thanked the CACG for the honour done him, saying “I am moved and inspired than I was yesterday”.

Earlier, the CACG held a town hall meeting with H.E Dr Ben Ammi in which people from all walks of life were given the opportunity to interact the Spiritual Leader. Students from Keta and Apam Senior High Schools had a critical encounter with H. E. Ben Ammi to clarify issues on a wide range of topics, particular on nature, culture, morality and development.

In response to some of the questions, Dr. Ammi stated that Africa's Problems are spiritual problems. He called on African Leaders to learn from their history and the African Cultural Value System which he described as a powerful tool which was the solution to the mastering of a perception engineering and deception perception by some countries in the west..

Dr. Ben Ammi also used the occasion to pay tribute to the late Major Courage E. K. Quashigah (Rtd.) describing him as a visionary and missionary leader who stood for the truth and the masses.

'It's Ridiculous, I’ve To Be Dealing With This Group Since 2...
19 minutes ago