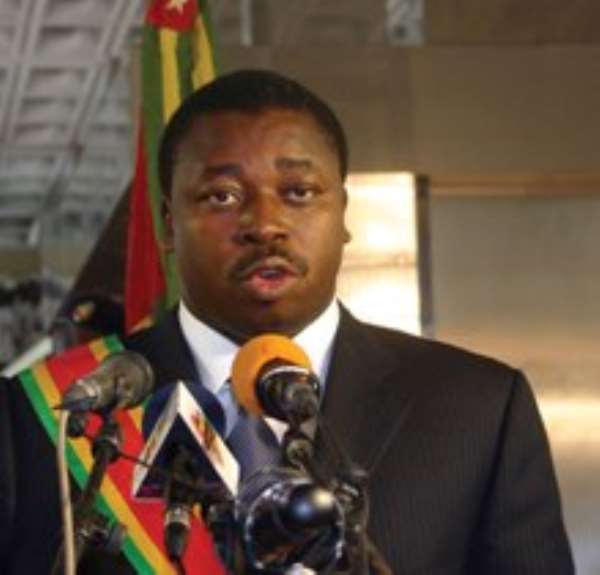 President Faure Gnassingbe defied all odds to make history by establishing himself as the most popular leader in Togo's presidential elections with a wide margin that has confounded his rivals into disbelief.

According to provisional results declared by the Independent National Electoral Commission on Saturday, Faure Gnassingbe swept the polls in four out of five economic regions of Togo.

"Based upon the number of suffrage obtained by candidate Faure Gnassingbe is hereby declared as President of the Republic in accordance with the results of the elections held on the 4th of march 2010" Provisional election results declared by the chairman of Togo's electoral commissioner Issifou Taffa Tabiou gave Faure Gnassingbe of the ruling RPT party 1.243, 044 votes against 692.584 votes by his closest opposition rival Jean-Pierre Fabre of the Union of Forces for Change party.

Jean-Pierre Fabre had auto-proclaimed himself the victor barely 24 hours after voting took place on Thursday the 4th of march 2010 without waiting for election results.

Kagbara Bassabi of the smaller opposition PDP party scored 8,357 votes with Nicolas Lawson of the Party for Redemption and Renewal PRR at the bottom of the league table with 6,029 votes. In all 3.277,492 voters registered for the presidential elections but 2.119, 829 electors cast their votes .

Participation was 64, 68 per cent.
"Based upon the number of suffrage obtained during the elections of the 4th of march candidate Faure Gnassingbe is hereby declared President of the Republic of Togo" , chairman of the Togo Electoral Commission said.

"I will like to congratulate the Chairman of all the local electoral commissions and their members for the security that characterized the centralization process and also for accepting despite the two sleepless nights to travel by road to comply with today's exercise", Mr Taffa said.

"The route to democracy has been long but we have accepted to take it as required by a modern country and improve upon our human conditions in order that the future of our children and future generations can be better than our past", he said.

"Therefore one of the ways requited to reach that goal is the freedom of thought and expression on all the issues concerning the state", Mr Taffa continued.

Even though Jean-Claude Delava , a representative of the opposition UFC party on the commission staged a walk -out in protest of the outcome of the polls claiming that they were not transparent, other members took part in the compilation of results brought into Lomé by the local election commissions from all 35 election districts of Togo.

"Due to the polemics about the most sufficient system for the transmissions and the centralization of results . I mean the VSAT, Fax, and SMS arguments, we have chosen for the easiest but less disputatious option", the commissioner explained. Thousands of ruling party supporters broke into jubilation in the northern sector of Lome. "I am very happy because this victory is clear without any allegations of fraud so nobody is going to demonstrate", a ruling party militant declared.

But attempts by opposition UFC candidate Jean-Pierre Fabre to organize a protest sit-in at the Independence Square was smothered when Police fired tear gas to disperse over 300 militants and supporters who were accompanied by presidential candidate Messan Agbeyome Kodjo and Kofi Yamgnane the ill-fated candidate who was disqualified by the Togo Constitutional Court.

President Faure Gnassingbe won in four out of five regions while Jean-Pierre Fabre took the Maritime region in the south.

EU and Ecowas observer missions identified a few anomalies in the polls but both concluded that "voting , counting and reconciliation of results were done openly and peacefully without any major incidents".

The provisional election results will have to be validated by Togo's Constitutional Court after all disputes have been reviewed.

Babacar N'Diaye , Head of the Ecowas Observation Mission which brought in 300 observers including 146 military and police officers to monitor the security aspects of the elections appealed to all candidates to accept the outcome of the elections with the same open spirit of tolerance with which they carried out the political campaigns. "Any disputes should be settled through the legal process", he advised.