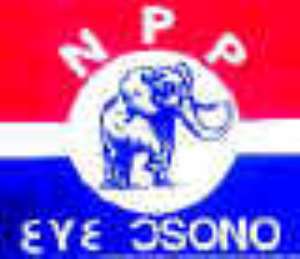 NPP North America Branch has successfully concluded its National Annual Delegates’ Congress in Newark, New Jersey on Saturday, September 21, 2002 at Rutgers University. Nearly 56 delegates represented the following states/cities in both USA and Canada: Los Angeles, CA, Houston, TX, Orlando, FL, Newark, NJ, New York, NY, New Haven, CT & New England States, Chicago, IL, Detroit, MI, Washington, DC, Montreal, Windsor, Toronto, and Calgary (Canada). The Chairman of the local chapter of Newark, NJ, K. Dwomoh Mensah welcomed the delegates to the City of Newark. The General Secretary, Kwame B. Acheampong of Houston, TX presented the annual report after which National Chairman, Philip Tawiah, Los Angeles delivered the State of the Party in North America. He urged members to encourage and support new branches in order to expand and build the Party in North America. He further stressed the importance of financial support from members as the Party prepares for the General Elections in 2004. Former General Secretary, Dr. Kwame Bawuah-Adusei, of Washington, DC delivered a motivating speech that emphasized cohesiveness among Party members to effectively work with the Party leadership in Ghana. Honorable Alhaji Mustapha Ali Idris, MP of Tamale and Deputy Minister of Foreign Affairs who was visiting the United States gracefully accepted to address the Congress. His brief visit was important to the entire membership as he also encouraged the delegates to continue to work together as a family and constantly keep in touch with the Party’s development and activities at home. Hon. Idris who was amazed by the attendance and commitment of the delegates promised to share his experience with his colleagues at home. Two important committees were formed to invigorate the activities of the Party in North America: Political Action Committee (PAC) and Business Development Committee (BDC) respectively. Members voted to maintain the elections of prospective officers as currently requires by the Party’s Constitution to reject a motion to elect officers based on a minimum of 2 years membership and of good standing. In addition, a motion to amend the Constitution to reflect a biennial instead of annual Congress failed. Members were encouraged to seek elective offices in Ghana with support from NPP North America. Lastly, members were urged to respond to President Kufour’s “Golden Age of Business” by bringing businesses to Ghana. The next Delegates’ Congress would be held in Chicago, Illinois to elect new officers in September 2003.