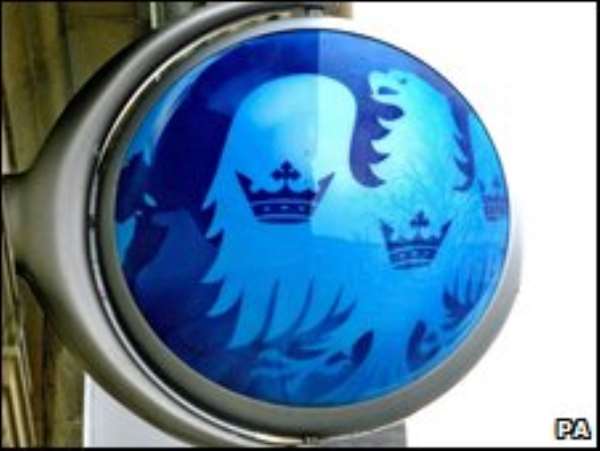 
Barclays Plc, the U.K.'s second largest bank, rose the most in more than nine months after saying 2009 profit more than doubled, lifted by investment banking and the sale of a fund management unit.

Net income rose to 9.39 billion pounds ($14.8 billion) from 4.38 billion pounds a year earlier, the London-based bank said today in a statement. That beat the 8.78 billion-pound estimate of 14 analysts surveyed by Bloomberg. Barclays Chief Executive Officer John Varley and President Robert Diamond have declined to take bonuses for a second year. The bank gained as much as 9.7 percent, the most since April 30.

“This is the first time in three years that we have had really positive news from a British bank,” said Ralph Silva, an analyst at London-based Silva Research Network, which specializes in financial-services firms.

Most of Barclays' profit derived from the sale of its Barclays Global Investors unit to BlackRock Inc. in December for a $9.9 billion gain. The investment bank recorded an 89 percent rise in profit to 2.46 billion pounds, the bank said today. The London-based lender declined British government capital injections in 2008 and taxpayer-funded asset insurance last year.

'Pressure Off'
“It's a big message, it is a very smart move politically,” said Florian Esterer, who helps manage about $58 billion at Swisscanto Asset Management in Zurich, in an interview with Bloomberg Television. “I think that takes a lot of pressure off Barclays.”

“We have strengthened our capital position, reduced leverage and added to our liquidity buffer,” Varley said in the statement. “We are, by consequence, both well prepared for any future economic weakness and also able to continue to execute on our strategy as opportunities arise.”

London-based Barclays fell 15 percent in the three months to yesterday, during which time President Barack Obama demanded that banks curb risk-taking and international regulators at the Basel Committee on Banking Supervision proposed that banks be forced to hold better-quality capital.

BGI Sale
Barclays may have to sell half its stake in BlackRock Inc. to plug a 17 billion-pound gap in capital by the end of 2012, Jonathan Pierce, an analyst at Credit Suisse Group AG, wrote to clients last month.

Barclays has posted the highest profit among European banks for 2009 so far. Banco Santander SA, Europe's second-largest bank, posted a $12.3 billion profit for 2009 compared with $12.2 billion in 2008. Deutsche Bank AG, Germany's biggest lender, posted profit of $6.9 billion, from a net loss of $5.4 billion.