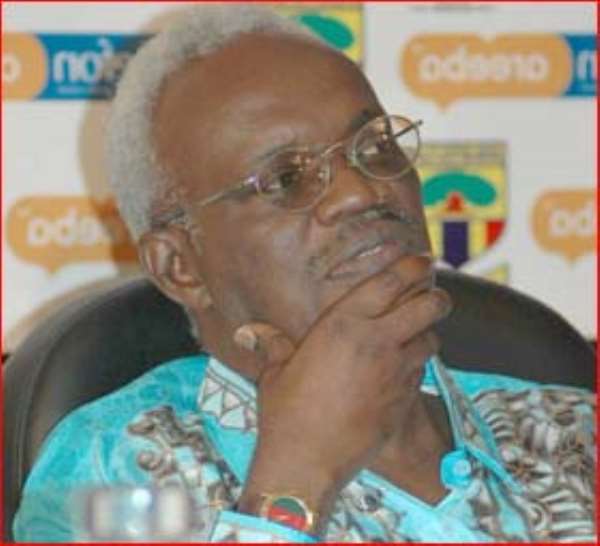 REPORTS REACHING DAILY GUIDE indicates that National Democratic Congress (NDC) founder Jerry John Rawlings is not enthused about attempts by President Atta Mills, who is the current leader of the party, to 'install old revolutionary guards through the back-door' in an attempt to take control of the soul of the party.

The reports say Rawlings is angry because President Mills and his Castle kitchen cabal are, in a premeditated fashion, seeking to bring back the 'old revolutionary handbags' to secretly be in charge of the party.

However, reports available say the former President is very angry and indicates that Mills can only smuggle the 'old guards' through the backdoor 'over his dead body'.

The old guards, who have been described variously in very uncomplimentary words, have not visited the former President since fire gutted his house on Sunday.

According to a very reliable source, the so-called characters being referred to by the former President, are Captain (rtd) Kojo Buta who now chairs the Finance Committee of the party, Captain Kojo Tsikata, Kofi Totobi Quakyi, and Ato Ahwoi.

It is believed that these party gurus have never been elected into public office since their foray into Ghanaian politics, but have been given juicy positions in the party's committees and take key decisions in the government.

Capt Kojo Tsikata Furthermore, all these old guards have worked with the former President under his military regime and in the administration of NDC one and two.

According to DAILY GUIDE's impeccable sources, the move by the President to bring back the old revolutionary guards continues to upset Rawlings so much that at a cocktail held for NDC foot soldiers at his Ridge residence recently, after a meeting of the NEC, Rawlings charged on President Mills, describing some of his appointees as 'foolish things around him' who must be booted out of the NDC-led administration.

“I said it the other day, the people he surrounded himself with; most of them have worked with me before. That's when I said who born dog.

“In my time, none of them would dare do the foolish things (they are doing) around him. I'm disciplined and I know Prof.is a disciplined man, but why is he not putting his foot down to make sure the nonsense going on around him is brought to a halt?

If I could do it why, can't he do it? If he can do that, we will begin to see some change and if they are not changing, he should boot them out. If not, if not, he will go down with them.

And if they want to take us with them, I'm afraid we will not go down with us,” ex-President Rawlings hollered to his listeners at the Ridge meeting with party supporters.

Kofi Totobi Quakyi DAILY GUIDE sources say the raging cold war in the NDC is about who determines President Mills' successor for the 2012 presidential elections after he has served his full term of office.

This explains the reason the Rawlings and Mills camps have been slugging it out right after winning the 2008 election.

The struggle became more intense in the days leading to the Tamale congress, as both camps moved heaven and earth to ensure that their preferred candidates won positions in the national executive.

The outcome of that congress reaffirmed Rawlings' clout in the NDC, as his men are said to have won at least 15 out of the 23 positions.

However, at the crunch NEC meeting last Tuesday, both Rawlings and the President took calculated steps to get the NEC to nominate persons they believe will work in their interest by pushing their favourites onto the various committees and to the directorates of the party.

Prior to the meeting, inside sources claim that National Chairman Dr. Kwabena Adjei and General  Mosquito, the General Secretary, were allegedly working in cahoots with the 'king-maker', Ato Ahwoi and security capo Captain Kojo Tsikata, to bring  in government officials to serve on the committees and directorates.

DAILY GUIDE sources at the crunch meeting said the NEC members spent a considerable amount of time discussing whether it was prudent to nominate persons serving in government onto the committees.

This was because some members feared government appointees would not have ample time for party work.

After a few back and forth arguments, the committees were eventually constituted and the following heads named:

Finance Committee to be chaired by Captain Kojo Butah, with Johnson Asiedu Nketia as member.

James Asante is the Director of Communications of the NDC, with Abaka Quansah as Director of Research.

Capt Kojo Buta A large number of NDC members and sympathizers, it's being claimed, have been disillusioned, since the party won the 2008 election, with the seemingly slow pace at which the new administration is executing its agenda as well as the alleged neglect of party foot soldiers.

These developments triggered a series of criticism, essentially from Rawlings and the Majority Leader, Alban Kingsford Sumana Bagbin who has now been offered a ministerial portfolio.

The issue of party foot soldiers and some key stakeholders being neglected also cropped up.

These developments, among others, triggered a series of criticism from the rank and file and soon, there was talk of 'taking back our party'.

This marked the beginning of a battle for control in the NDC and the emergence of the Rawlings and Mills camps.

The divisions became more pronounced in the days leading to the national delegates' congress of the party in Tamale, as the two camps openly supported opposing candidates for national executive positions.

It is however unclear how the situation will play out since the raging fire that consumed Rawlings' residence last Sunday triggered burning questions about 'who or what' might have caused the blaze and explosions at the Ridge residence of the former President.