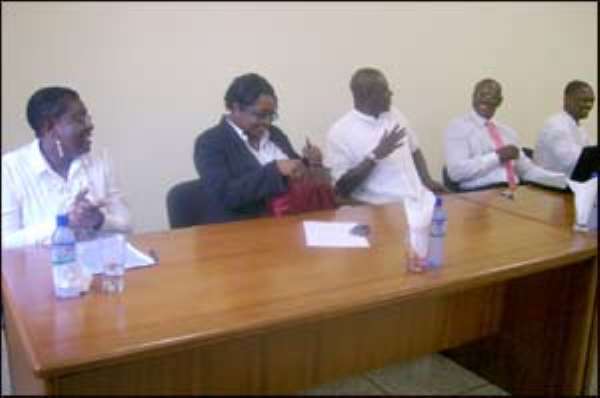 Abdul Malik Kweku Baako Jnr, Editor-in-Chief of the New Crusading Guide, has admitted that there are 'serious' ethical challenges currently confronting the practice of journalism in the country.

He however pointed out that such challenges do not constitute the basis to sideline the media in the democratic process, noting, “Media pluralism is indispensable in the quest to consolidate the country's democratic dispensation.”

Mr. Baako was addressing students of the Legon Centre for International Affairs (LECIA) at the University of Ghana in Accra on Wednesday on the topic, “Ghana's democratic development: Role of the media in the 4th Republic.”

The symposium was organized by LECIA to enable the students to interact with some media personalities, including Kwaku Sakyi-Addo, formerly of the British Broadcasting Corporation (BBC), Gina Ama Blay, Chief Executive Officer (CEO) of Western Publications, publishers of Daily Guide and Emma Morrisson of TV3 Network.

Mr. Baako said, “There has been a long battle to bring the media landscape to where it now. The media played a significant role in the fight against military dictatorship and has also helped to break the 'culture of silence'. We have collectively brought the nation to where it is today.”

He noted that although the print media is credited for blazing the trail in the quest to ensure freedom of speech, explaining that “the electronic media seem to have changed the media landscape even better.”

“Media pluralism is crucial in consolidating democracy. The proliferation of radio stations, civil society groups and professionalism of the military are all helping to prevent coups in Ghana”.

The Editor-in-Chief further said social commentary in the country should not be discouraged, adding, “I would prefer ugly noises to 'culture of silence'.”

“Maintaining high ethical standards in journalism is the responsibility of very media practitioner and I admit that I have been guilty of ethical breaches at some point in time in my career and whenever my attention is draw to it I do a retraction,” he added.

Mr. Baako further revealed that in the case of ethical infraction, evidence must be produced so that the issue could be interrogated.

“The spirit of plurality that drives us forward is key. The media is a leader in this. Gradually, we are building a better and prosperous nation, he stressed.

Mr. Sakyi-Addo, who spoke on the development of democracy in Africa, said elections alone does not constitute democracy, but rather what happens in-between elections.

He said, “Most African countries would not meet a rigorous definition for democracy if we are to critically assess progress in those countries. However, we are all beginning to see competition and improvement in democratic standards on the continent.”

Mr. Sakyi-Addo said democratic practice was expanding the space for competition and serving as a source of encouragement for people to aspire for political office, indicating that “democracy has given people the voice to demand accountability and there is an incremental development in the political landscape.”

“In Ghana, we are getting dividends for choosing the path of democracy and we should all work towards strengthening the institutions that make democracy work better,” he noted.

“Despite the challenges of democracy, process has been found to be 'desirable, which is the best way forward for the development of Africa. It is a journey and involves a learning process, but it is not an end in itself,” Mr. Sakyi Addo emphasized.

Speaking on the topic, “Democracy and development in Africa: The Daily Guide's experience,” Mrs. Blay said freedom of expression and media independence were critical elements in the democratic process without which there would be no democracy.

“The media plays an effective watchdog role in any democratic dispensation. It affords the people an opportunity to hold their leaders accountable to champion unity,” she said.

She noted that although the media in Ghana has a chequered history, it has hugely shaped freedom of expression in the country.

Mrs. Blay said currently the media is with faced with various challenges, including the lack of resources, technology and professionalism, noting, “In all these, the media has served as a necessary partner in our democratic process and the expansion of the frontiers of free speech.”

Ms. Emma Morrison, who shared her experience with the students, said effective utilization of the media would promote rapid development.

She said efforts by the local media to grow had been undermined by international organizations and institutions.

“Such institutions and personalities view the local media as insignificant. They prefer international media organizations to the local ones.

They do not trust issues raised by the local media and only take action when the international media brings up issues,” she added.

She revealed that the media in post-conflict countries do not have adequate resources to operate effectively, stressing that they would do anything to survive at the expense of professional standards.

Dr. Vladamir Antwi-Danso, Head of LECIA, expressed concern about the undue politicization of issues by the media.

“The whole of Ghana is being infected with the syndrome of National Democratic Congress (NDC) and National People Party (NPP), which is unacceptable,” he said.