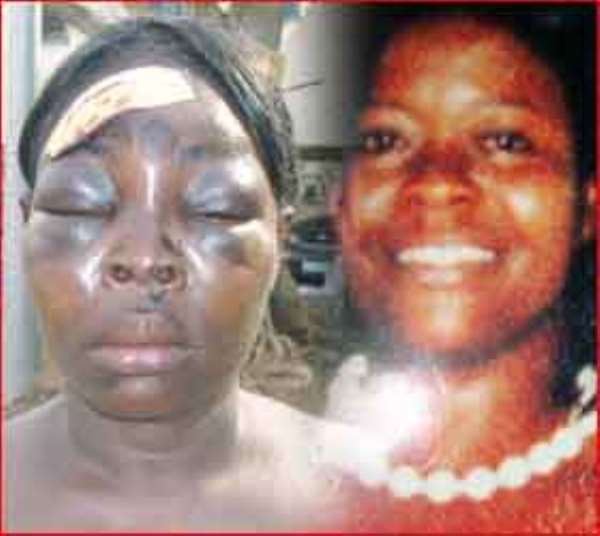 THE YOUTH queenmother of Shia in the Ho municipality, Mama Sohefia, has poured hot pepper mixed with water into the eyes of one of her subjects; Comfort Bosso.

DAILY GUIDE gathered that Mama Sohefia also used a torchlight to assault Comfort, which has left her with a swollen face and a deep cut on her forehead.

Known in private life as Gladys Kemetse, the queenmother, after the act, was reported to have quickly rushed to the Tokokoe Police Station to lodge a complain that the victim had rather assaulted her, asking the police to arrest her.

The police, DAILY GUIDE gathered, upon reaching the house of Comfort realised that her situation was so bad that she could not have been the one who attacked the complainant but was rather the victim.

They therefore asked her to report at the Police Station at her own convenience, subsequently arresting the queenmother.

According to Ms Bosso, she was insulting her son who had been disrespectful to her but the queenmother took offence that the insults were indirectly meant for her; thus picking up a quarrel with the victim.

In the process, she mixed grounded pepper with water and poured the mixture on Ms Bosso's face and while the victim was screaming for help, the queenmother allegedly used a torchlight to hit her forehead several times, leaving the woman helpless on the floor until people came to her aid.

Police report confirmed the assault and referred the victim to the Ho Municipal Hospital.

When DAILY GUIDE contacted the queenmother for her side of the story, she was reluctant to speak and only questioned this reporter as to where he got her mobile phone number from.