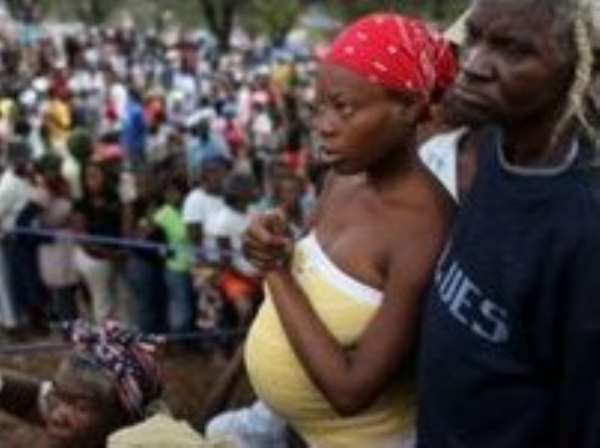 
Haiti's President Rene Preval has vowed that his country will live on, during a day of national mourning held a month after the earthquake struck.

He spoke at an emotional ceremony in the capital, Port-au-Prince, near the ruins of the National Palace.

"Haiti will not die, Haiti must not die," he told mourners.

At least 217,000 people died in the devastating earthquake on 12 January, which also left about 300,000 injured and one million homeless.

Representatives from Haiti's two official religions - a Catholic bishop and the head of the Voodoo priests, both robed in white - joined ministers from Protestant denominations for the main prayer service in central Port-au-Prince.

Hundreds of people gathered for the ceremony in the shade of mimosa trees. President Preval wept during the service, and was comforted by his wife.

"Wipe away your tears to rebuild Haiti," he said in his address.

"Today, allow me as citizen Rene Preval, the man, the father of a family, to address you to say that I cannot find the words to speak of this immense pain.

"It is in your courage that we will find the strength to go on."

Other prayer services were held across the country, including one at the site of a mass grave outside the capital which is believed to hold tens of thousands of victims.

Later, at the exact time the earthquake hit, 1653 local time (2153 GMT), Haitians at home and abroad will be asked to kneel and pray.

The Associated Press news agency reports that the remaining churches in Port-au-Prince's Petionville suburb were so packed that loudspeakers had to be set up so those left outside in the streets could follow the service.

"All families were affected by this tragedy and we are celebrating the memory of the people we lost," one mourner, Desire Joseph Dorsaintvil, told AP.

The BBC's Mike Wooldridge says the act of national reflection comes as one of the largest humanitarian operations ever mounted grapples with challenges on many fronts.

He says a heavy downpour on the eve of the anniversary provided a foretaste of the misery that lies ahead for the many people who still have only the flimsiest shelter in impromptu camps, if the pace of getting out more tents and stronger shelter materials is not stepped up before the start of the rainy season.

In the biggest of the camps that sprang up in the capital after the earthquake, people are still living under sheeting strung across wooden poles.

The government says the seasonal rains could be the biggest threat now to the nation's attempts at recovery.

The European Union has proposed a military mission to step up the provision of shelter before the rains worsen.

This week's Haitian government figures suggesting up to 230,000 dead means the quake toll is approaching that of the 2004 Asian tsunami, which killed 250,000 people.