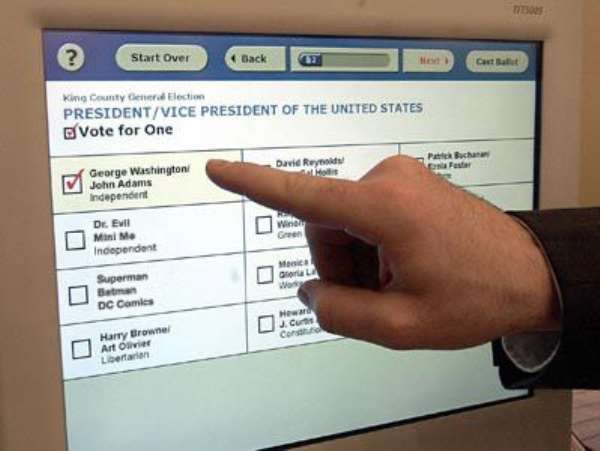 The Danquah Institute and other agencies must be commended for coming up with a laudable idea in the means of strengthening our electoral process by the introduction of e-voting as an alternative to manual ballot boxes to ensure free and fair election. But there are other pressure groups that are of the view that computerized voting equipment otherwise known as e-voting should have no place in a free, democratic society. The main notion is that the validity of our presidential and parliamentary election results is too important to allow it to be tampered, due to existence of spyware and hacking of the computer system.

If we are promoting the use of e-voting, then we might as well advocate for Postal voting, which is a process of voting before the campaigning period is finished. But postal votes as well as Electronic voting is another form of voting that does not ensure a free and fair election. Electronic equipments are known to be penetrated by spyware and other known and unknown viruses; they can also be manipulated at any stage in the large transfer system so fraud can happen at any time by those outside the system.

Secondly E-voting can be a perfect way for the Ghanaian politicians to switch and control the results of an election in their favor, since the computer system is easily subject to manipulation, precisely because it can be tampered by any administrator without the knowledge of the general public. In other words when the computerized equipment has been tampered, there is no practical way to review the vote to verify what was indicated by the voter was what the computer tallied it as. Then also Putting video cameras in voting booths would violate the confidentiality of the voter. At least until there are foolproof methods to ensure the accuracy of the voting equipment, such equipment should not be used.

The third reason why Ghanaian voters should debunk the idea of e-voting is the fact that Computer programmers' can be set up to discard votes, ignore votes, etc. What proof does the electorate have that the vote has gone where it is supposed to go? I ask this not just because there have been many instances where trials of electronic voting has failed to produce the correct answer, but because I don't trust our politicians to allow a fair and honest election. They are more interested in their own political life than the lives of the people who elect them.

There is no doubt that the use of paper ballots is slow and cumbersome, however it is the time-honored, definitive voting method with physical backup of the voter's intent. Paper ballots enable local elections officials to perform recounts and if necessary, to interpret the intent of a given voter. When computers are involved in elections, there is no record that can be reviewed or interpreted. That means there is an important "check and balance" that has been lost with the conversion to electronic voting.

Thus it is worthy to note that rushing in obtaining results from computers can be problematic, since the results cannot be certified as valid by all political parties because of all the inconsistencies involved around the computerization processes in e-voting. Where there are opportunities for abuse, they are likely to be used. That is why use of the standard computerized voting equipment should be suspended.

I place electronic voting alongside telephone voting, and postal voting; all can be abused to encourage a particular outcome which is untrue. The only true method of democratic voting is by the pen and paper and the ballot box. Telephone voting can be switched to another person, or prevent an area even gaining access to the vote, and then there is no proof you actually got through to where you wanted to go.

Perhaps, someday there will be technology developed that will maintain the voter's confidentiality and still vouch for the authenticity and correctness of the ballot count in electronic equipment. However, until that is verified to have been achieved, we must conclude that voting by computer is inherently subject to manipulation of results. Since that is contrary to our young democratic Ghanaian ideals and goes to the heart of freedom, computerized voting should be suspended or eliminated until there is easily verifiable evidence that it cannot be used to manipulate election results.

At the beginning of the 4th republic we had a good, relatively safe, method of democratic voting: everyone knew how many ballot boxes there should be, they were locked until the time when the count should begin, and the votes were kept secret. Then with time, politicians who were corrupt tried to change things so the vote would go in their favor: they weren't prepared to abide by the proper democratic decision. Things began to slowly unravel, and democratic voting became a twisted game in which the voter was the loser.

Thus in conclusion, Electronic voting allows so many mistakes, twists, corrupt decisions, to be made that I would never trust a decision based on electronic voting. No-one can be sure that corruption within the electronic voting procedure will not happen. It really is the stuff of democratic nightmares!