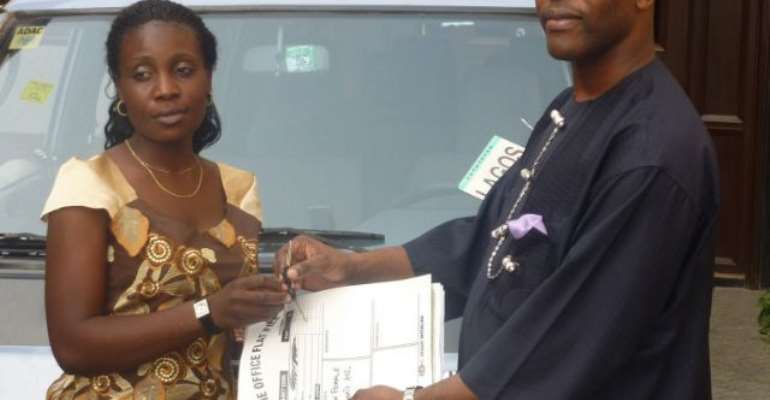 The Prince handing over the key and particulars of the bus to Mary, president of the Ijaw Female Students Association

9th February, 2010 will remain evergreen in the history of the Ijaw Female Students Association, Nationwide. It was the day one of their own, Prince Tonye Princewill; the Rivers State AC Leader redeemed the pledge of a bus he made to them last November during a visit to his residence in Port Harcourt. Taking delivery of the 14 Seat Mitsubishi bus from the Prince in his Port Harcourt residence, President of the association, Mary Nagberi, a Political Science student of UNIBEN, could barely conceal her excitement. Thanking Prince Tonye profusely, she stated that though the idea of a bus was that of her predecessor, Florence Kalio, who in November 2009 along with the then Executive presented the Prince with the award 'Light of the Niger Delta Politics', she considered it an immeasurable honour that the pledge be redeemed so soon and especially during the early days of her tenure. She enthused that this act of redeeming his pledge has shown the Prince to be a man of integrity and that the association was not wrong in its choice of the Prince as the recipient of the highly coveted award. She assured the Prince that the bus will be put to judicious use.

Comrade Miebi Omona, the Chief of Staff, Ijaw Monitoring Group (IMG) who represented its President, also commended Princewill for the gesture stating that, “Prince Tonye Princewill has proven that he is a Leader we all can trust and cast our future in his hands. He can be sure that he can always count on us. .. we urge other Leaders from the region to emulate him in order to give a sense of belonging to our youths.

In a post presentation speech, Prince Tonye Princewill urged members of the association to stay focused, steadfast, honest, visionary and committed in their efforts to prove to the world that the youth of the region are not violent with the tendency of militancy. He said his gift of a bus was not an act of wanton show of wealth but rather borne of a sincere need to assuage the logistics and associated challenges the association faces. He urged every leader to rally round and think of ways to alleviate problems faced by our youths.