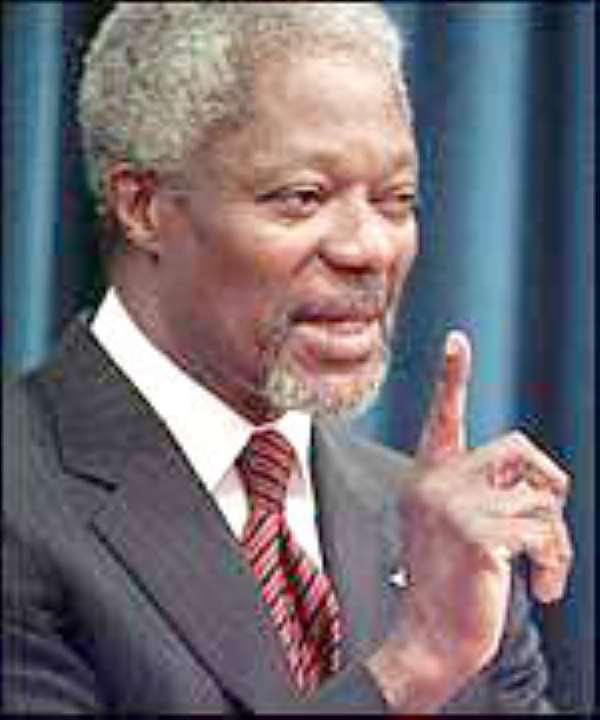 “What begins as a failure to uphold the dignity of one life, all too often ends as a calamity for entire nations”- Kofi Annan, former UN Secretary-General. It wasn't only surprising but very worrying at the ghastly sight of the conditions of our own people during Metro TV's insightful documentary on the state of Ghana's prisons during the last quarter of 2009. One is always compelled in such grim situations to question Ghana's development agenda if really we can make great strides towards soothing the threats of chronic poverty.

Are we exhibiting the features of a committed state that upholds the principles of democracy? There is no doubt that the prisons in the country for now are akin to refugee camps in war-stricken countries or slave grounds.

These awful conditions in our prisons are even difficult to ascertain especially when Ghana has been proudly touted for its improved democratic credentials and as such regarded as the beacon of democracy in Africa.

Are we really upholding the significant feat of “Freedom and Justice”? Without any shred of doubts, what we see today is a clear case of injustice and act of slavery.

The prisons which are places to reform detainees and prisons to become more useful to society have now been made the ground to mercilessly punish people. It is therefore right to say that Ghana is rather enslaving her people and as such bringing back into memories the pain of slavery under colonialism.

The article is meant to reveal the fact that our development aspirations are just impossible to be realized if the fundamental human rights of detainees and prisoners are not protected.

We are getting it all wrong!
What is happening in the prisons casts doubt about Ghana's legacy of credible democracy. It's a misplaced agenda if Ghana is aspiring to achieve economic growth and development without regarding the need to ensure the protection and advancement of fundamental human rights especially with reference to the 1948 Universal Declaration of Human Rights.

The UN declaration provides a framework for practical action at the international, national and sub-national levels to reduce poverty premised on human rights protection and advancement.

This establishes the fact that our efforts to reduce poverty would indeed make no meaning if the protection of human rights especially in the prisons is left in the lap of the gods.

The 1992 Constitution, supreme law of the land, stipulates in Article 14(1) that “Every person shall be entitled to his personal liberty”. But what is being experienced today is a sharp contravention of the law of the land.

While a person in prisons in the US and UK can acquire a high standard of education or even earn a degree, prisoners in Ghana are not even treated to achieve simple psychological reformation. They come out the same and even worse.

What is even distressing is the Gp60 per day feeding fee made available to detainees and prisoners.

It is again interesting but crucial for our development to note that the only capacity of the Gp60 is to prepare a meal completely outside the horizons of 'good taste' for prison inmates.

During Metro TV's prison news documentary, one could see an insipid palm soup, very watery and which is ideally not a diet for an ordinary human being.

It goes without saying that the feeding fee is woefully inadequate. After serving sentences, the country should be convinced that offenders would not commit the same offence but would contribute their quota to the myriads of development approaches. One can still practice his nutritional belief in the prisons in the UK and elsewhere. We have vegetarians and fruitarians and even those who do not consume sugar or salt.

Can a prisoner who is a vegetarian or fruitarian hold on to these practices in Ghana's prisons? Certainly not, when even foods prepared for all are woefully inadequate and poorly cooked let lone vegetarianism or fruitarianism.

As said by Mr. Emile Short, Commissioner for the Commission for Human Rights and Administrative Justice (CHRAJ), there are 1,554 remand prisoners at Nsawam Medium Security Prisons alone constituting 57 per cent of about 3,000 inmates in the prisons.

What should be known is that these injustices in the prisons are not only a threat to the progress of the economy but exposes the failures of our judicial system and state institutions especially when remand prisoners outnumber prisoners. We are living in a country where a person can go on remand for more than 10 years.

It is striking to know that these happenings mean that the country is condoning the situation where poverty should reign supreme, may be forever. Any proposed long or medium term development plan would cause no significant progress if this dilemma is not tackled expediently.

Prisoners also reserve the right to quality food, housing and general improved livelihoods regardless of the place they are. Detainees and prisoners can be reformed to ensure the safety of all Ghanaians. Prisoners and detainees are potential sources of tax to be used in national development. They should not come out of the prison the same.

As rightly said by Mr. Kofi Annan, the calamity of underdevelopment would befall the whole country and not specifically the people under that inhuman conditions if nothing is done right now. Our development agenda would badly be damaged especially with respect to achieving the Millennium Development Goals by 2015.

What should be done?
It behoves government, parliament and the courts to ensure sanity in our prisons. Those people there are important human resources that can be tapped to bring about growth and development.

The welfare of prison mates should equally be as important as the votes politicians intend to garner during presidential and parliamentary elections.

The government as a matter of importance should expand and improve the facilities in the prisons. The government should increase the feeding fee to a sustainable level. Prison should not be seen as a place of punishment or slave grounds but a place of complete reformation. The judiciary should move into dealing with cases as early as possible to cut down on the number of remand prisoners.

By virtue of the fact that the country is blessed with vibrant civil society organisations and non-governmental organisations, it rests on these groups to strongly advocate for the increased commitment of government to the interest of prison inmates.

Again, CSOs and NGOs including individuals should augment the efforts of government in improving the feeding fee per day and prison facilities.

These would include psychological therapy, strong counseling and education unit to change the mindsets of prisoners and detainees. Significantly, these conditions left unattended to would definitely exact a heavy toll on the country's effort to develop. We ought to pull together the myriad threads that combine to cause a leap forward for an economy. If one thread is already pulled out, then what becomes of the fate of the country desperately seeking for a lasting solution to chronic poverty? These conditions all culminate in our state of underdevelopment and would end up being a calamity for Ghana.

Conclusion
The country should spare no effort towards freeing our people from the dehumanizing conditions of our prisoners. We should live up to the high mark of democracy. Candidly, Ghana is enslaving detainees and prisoners than the “FREEDOM AND JUSTICE” we believe in. The most significant issue is related to the fact that development and growth of the economy would be a mocking mirage if human rights protection and livelihood empowerments in the prisons are not revised and enhanced.

We should uphold the significance of fairness and freedom and justice for a possible development tomorrow. God bless Ghana!

The author, Stephen Yeboah is at the Department of Planning, Kwame Nkrumah University of Science and Technology, Kumasi-Ghana. [[email protected]

Election Petition: Supreme Court is not a forum for “organis...
21 minutes ago

Two grabbed for child trafficking in Tatale
21 minutes ago