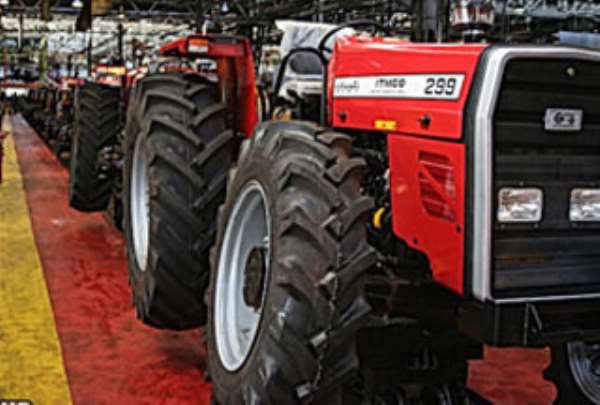 The Federal Government has been commended for its agricultural programme on acquisition of tractors through a Public Private Partnership (PPP) scheme which is seen as a critical factor in the country's quest at becoming sufficient in food production.

Mr. Tarun Das, the Executive Director of Afcott Nigeria Plc, who gave the commendation said the scheme will help fast_track mechanisation in the country's agriculture.

He said Nigeria has huge human resource, arable land, population and comparative advantage to produce enough food for local consumption and export, and that these would be greatly helped by the tractor programme.

According to Das, initiatives by the Federal Ministry of Agriculture and Water Resources as well as her programmes on crops production would equally help to accelerate mechanised farming in the country.

“In addition, the tractor scheme being propagated through Public Private Partnership (PPP) will increase productivity, encourage more farmers including youths to farm because the drudgery would have been reduced,” he said.

The public private programme on tractor schemes introduced by the ministry is to enhance farmers' easy access to machines at subsidized rates. The tractors are given to the farmers through cooperatives at very friendly terms, with the three tiers of government paying certain percentages of the costs of the tractors and the cooperative paying the balance spread over a period of three years.

Making reference to these, Das said that the Federal Ministry of Agriculture has given enough sensitisation for farmers to take advantage of the scheme.

According to him, there is a need for the country to go into mechanised farming to reduce food importation, generate enough raw materials for industries and export.

He decried poor maintenance culture as a problem, saying that it is likely to affect the noble intentions of the tractor scheme, especially as experience has shown that a few tractors are now grounded at some locations, over little faults, saying the country's mechanised farming cannot move forward with such an attitude.

On the durability of the tractors, he said that the Mahindra tractor is manufactured in India and has been in operation for more than 50 years adding: “ India is the largest tractor manufacturer in the world and maintains 35 per cent of the global market share. Mahindra has been tested and proven to perform optimally in Nigeria. It has been certified as most suitable for the Nigerian environment. The company's confidence to spread the payment across three years,

shows the quality and durability of the tractor, and the confidence the company's management has in their tractor and the Nigerian economy,” he said, adding that is also why maintenance and after sales service is part is part of the service offering.

According to him, the tractor is given to cooperatives on a lease and that it could use this as a common facility or lease to farmers, with the aim being to generate income, increase productivity and also generate employment.

Subramanian as part of its continuing commitment to the economy, that the company trains Nigerian farmers at every planting season on crop protection, best farm practices and also engages extension workers to assist such farmers.