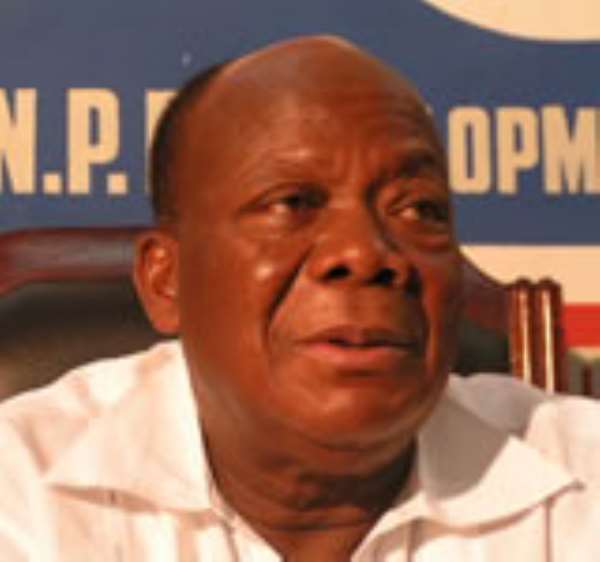 
A former National Chairman of the opposition New Patriotic Party, Harona Esseku says calls on former President John Agyekum Kufuor to mediate and reconcile the growing acrimony between supporters of Alan Kyeremanten and Nana Akufo Addo may not yield any positive results because the former president is coloured.

A founding father of the New Patriotic Party, Dr Nyaho Nyaho Tamakloe, on Wednesday, February 3, called on the former President to assume the role of a mutual father and heal the Alan-Akufo-Addo wound which is fast drifting the party apart.

Tension keeps mounting between supporters of Presidential hopefuls Nana Akufo Addo and Alan Kyeremanten as the two seek to annex the flagbearership position of the NPP for the 2012 general elections.

Last week, some supporters of Alan Kyeremanten were attacked by bodyguards of Nana Addo Dankwa Akuffo-Addo after the former had reportedly launched an attack on the 2008 flagbearer of the party.

Dr. Nyaho Tamakloe believes that, J.A Kufuor, with his stature as an elder of the party and the former President of this country is the best person to reconcile the two camps.

But Harona Esseku who thinks otherwise told Citi FM that the former President's perceived support for Alan Kyeremanteng's Presidential bid will make it difficult for him to be trusted.

“Former President Kufuor, unfortunately has been known to be heavily involved on the side of Alan since the 2007 primaries. Whether it is true or not there is this heavy and great perception that he aligned himself with the Alan campaign...when people already are criticizing you or believe so strongly that you are of one camp, the exercise of trust and dignity becomes so difficult because people become very suspicious about you, as it is the case with former President Kufuor,” he said.

Already, some members of the new executive committee of the NPP in the Ashanti Region have expressed their frustration with the factionalism in the party and have declared their determination to manage the Alan Kyerematen/Nana Akufo-Addo dichotomy to ensure that the party's front in the region does not break.

Although it is generally accepted in the NPP that the Alan/Nana factionalism, if not checked could pose a threat to the party's 2012 agenda, it is not clear what mechanisms the NPP is putting in place to deal with it.

Harona Esseku believes it will be a daunting task for the ex-president to attempt mediating between the two camps.“He can try but it's going to be very difficult for him because of the perception,” he said.

Harona Esseku, however refuted claims that Nana Addo and Alan are causing confusion in the party. “...they are pushing our interest. All we have to ask the two of them is to go by the rules and regulations...My advice to the two candidates is that: please campaign but do it according to laid down principles within the party and all supporters of either must not be seen to always be making some statements that will be so annoying to another party,” he advised.