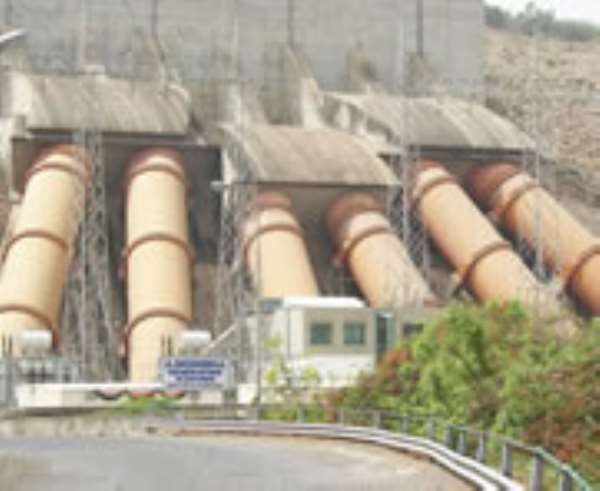 
Ghana's capacity to generate energy for industrial, commercial and domestic use is in serious crisis because of the failure of mining companies, industries, ministries, departments and agencies (MDAs) to pay the huge sums of money they owe the Volta River Authority (VRA).

Furthermore, the VRA claims that it is compelled to sell power cheaper than the production cost, as a result of which what it obtains from loyal customers who pay their bills regularly is not enough to sustain its operations, a situation that has plunged the authority into a critical financial situation.

Figures available to the Daily Graphic put the current debt owed by MDAs to the VRA at GH¢90 million, while some mining companies also owe the authority more than GH¢15 million.

Some of the companies, described as "distressed mining companies", are Dunkwa Continental, the Ghana Consolidated Mining Company at Akwatia and the Prestea Gold Resource.

As the big consumers and government agencies appear reluctant to meet their debt obliga-tions, the VRA is pushing for higher tariffs to enable it raise the needed revenue for the sustenance of its operations.

Alternatively, it says it will require extra funding from the government for the sustenance of its operations and to prevent the situation from deteriorating further.

The Head of Public Relations at the VRA, Mrs Gertrude Koomson, put VRA's loss at 50 per cent of its production cost and listed inflation and increases in crude oil prices as other factors contributing to the huge losses.

"The authority is in financial distress which needs an urgent solution to enable it to continue to generate power," she lamented.

"As things stand at the moment, there is no way the authority can continue to effectively serve the nation, since its revenues are not covering the cost of production," she added.

She pointed out that the authority spent between $30 million and $40 million a month to procure crude oil but failed to generate enough revenue to pay for the oil.

Mrs Koomson said the last time the authority was allowed to increase tariffs to 6Gp per unit of electric power was in November 2007, adding that the production cost of one unit had currently depreciated by 50 per cent.

She said currently the authority had huge monthly bills which were becoming difficult to pay, adding that it had to rely on banks for letters of credit (LCs) to enable it to purchase crude oil.

She said those bills were as a result of the continuous rising cost of crude oil which the authority used in running the thermal plants at Aboadze and Tema, which constituted 40 per cent of the nation's power supply.

She explained that when the old tariffs were fixed in November 2007, there was the understanding that Ghana would receive natural gas, which was cheaper, to run the plants, but added that gas had up till today not arrived in the country from Nigeria, thereby forcing the VRA to use crude oil.

She said the 2007 tariffs were out of date, since inflation had gone up and the cedi had also depreciated against the dollar over the years.

Mrs Koomson said the VRA believed that the time had come for the public to start paying the right price for electricity and went further to state that the authority had presented a proposal to the Public Utilities Regulatory Authority (PURC) and was awaiting its response.

She observed that if the right price was not paid today to meet the cost of production, consumers might be compelled to pay much higher prices in future that is, if the system did not collapse completely.

"Right prices provide for adequate maintenance of a system that has been under-invested in for many, many years," she stressed.

She said paying the right price could also encourage private investors to come into the energy industry, as was being done elsewhere.

The public relations officer cautioned the country not to behave like Nigeria where there was plenty of oil and gas but there was no electricity because people were not paying the right tariffs.