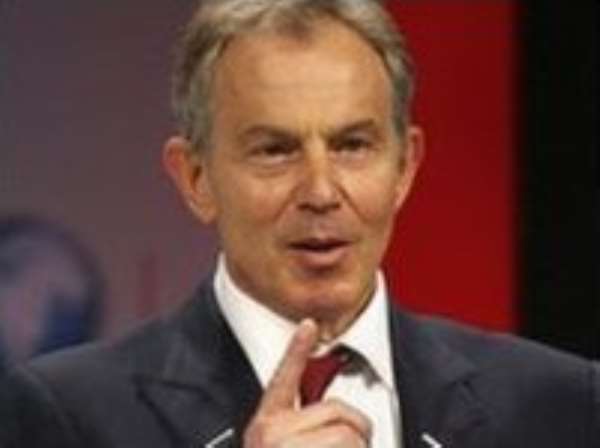 
Tony Blair has denied striking a "covert" deal with then US President George Bush to invade Iraq at a private meeting in 2002 at his Crawford ranch.

Mr Blair said he had been "open" about what had been discussed - that Saddam Hussein had to be dealt with and "the method of doing that is open".

He said he had told the US president: "We have to deal with his WMD and if that means regime change so be it."

Mr Blair is being questioned by the Iraq inquiry.
Earlier witnesses have suggested that Mr Blair told Mr Bush at their April 2002 meeting that the UK would join the Americans in a war with Iraq.

Mr Blair also denied he would have supported the invasion of Iraq even if he had thought Saddam Hussein did not possess weapons of mass destruction, as he appeared to suggest last year in a BBC interview.

Removing Saddam was "always an option", it was only one of several options open to the US and UK, he said.

"I did not use the words regime change in that interview," he said.

"The position was a breach of UN resolutions on WMD. That was the case. It was then and it remains."

Inquiry chairman Sir John Chilcot began the six hour question session by stressing that Mr Blair was not "on trial" but said the former prime minister could be recalled to give further evidence if necessary.

The former PM began the session by saying Britain's attitude towards the risk posed by Saddam Hussein "changed dramatically" after 11 September 2001.

The former PM said that the policy up to that point was one of "containment".

Mr Blair is facing questions in public for the first time about taking the UK to war against Iraq.

Families of some of the 179 British service personnel killed in Iraq are watching the evidence with others said to be joining the 200 or so anti-war protestors outside.

Rose Gentle's son, Gordon, was killed by a roadside bomb in Basra in 2004, while serving with the Royal Highland Fusiliers.

Regime change
She said the families of the dead wanted closure and for Mr Blair to explain "in depth" to the families and and the public "why he went in" as she said he had never done that before.

The Chilcot inquiry is likely to ask Mr Blair at what stage he promised US President George W Bush Britain would support military action against Iraq.

Some witnesses have said assurances were given in 2002 - although the then Attorney General Lord Goldsmith has told the inquiry he had warned Mr Blair that using force for regime change would be illegal.

Lord Goldsmith, whose legal opinion cabinet ministers and the British military depended upon before agreeing to involvement in the war, said he originally believed the United Nations had to approve the use of force and only changed his mind a month before the invasion.

Mr Blair has also set up another line of questioning by saying in a recent BBC interview that he would have backed the invasion even if he had known beforehand that Iraq had no weapons of mass destruction.

'Overtly political'
A former head of the civil service, Lord Turnbull, told the inquiry they should question Mr Blair about this because throughout the period leading up to war, Mr Blair had been "unambiguous" that disarming Saddam of weapons of mass destruction was his primary objective.

In his appearance, Mr Blair's former director of communications Alastair Campbell sought to address some of the questions around the key September 2002 dossier on the alleged threat posed by Saddam published in the run up to the war.

The dossier included a foreword by Mr Blair in which he wrote that he believed the intelligence, which the inquiry has been told had many caveats attached, had established "beyond doubt" that Saddam Hussein had continued to produce chemical and biological weapons.

Mr Campbell, who drafted the first version of the foreword - ultimately approved by Mr Blair - said no-one in intelligence challenged this statement which, he added, never suggested Saddam Hussein "was able to do something terrible to the British mainland".

This will be the third time Mr Blair has given evidence during an inquiry into the Iraq war.

He previously gave evidence to the Hutton inquiry, the Butler review and the Intelligence and Security Committee investigation - although the latter two into the pre-war intelligence took place behind closed doors.

Questions at the Hutton inquiry were restricted to events surrounding the death of government weapons scientist Dr David Kelly, rather than the political decisions behind the war.