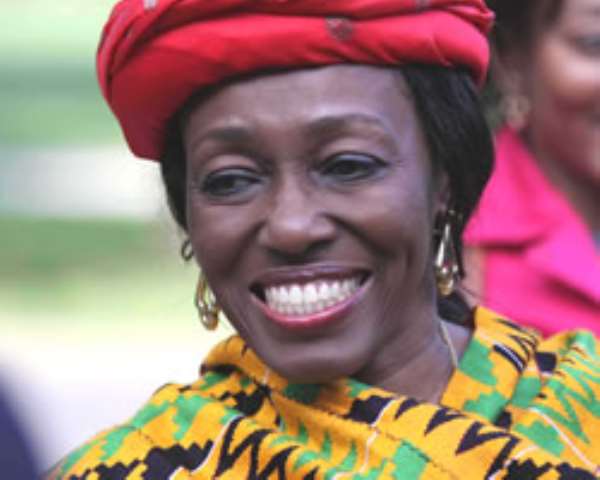 Mrs. Rawlings is vexed at Dr. Adjei and has gone public with the matter because the latter had failed to consult the party's leadership to seek their view when he was called by President Mills to discuss the said reshuffle.

“The Chairman cannot take a decision for the rest of us without informing us…these are the things that have made some of us go into the party so we will have at least a democratic way of doing things in our party,” Mrs. Rawlings told Citi Fm in Accra yesterday.

Her comments carry a lot of weight as she is not only the wife of Jerry Rawlings, founder of the NDC, but also has a relatively large constituency of ultra-party loyalists including the revolutionary red-beret members of the 31st December Women's Movement.

“We have to find out if Dr. Kwabena Adjei was consulted as an individual or he was consulted as the Chairman of our party. If so, he was elected as a member of the party to chair the party's activities; we also as National Executives were equally elected to the party,” she added.

The party Chairman told the media that President Mills had appropriately consulted the party leadership and discussed the said reshuffle. The claim is what Mrs. Rawlings is challenging, saying she has no knowledge of it.

The nomination of the three has generated a raging controversy and condemnation as it is being interpreted by many as a direct 'weakening' of the Majority front in parliament.

The hullabaloo got more twisted when two of the ousted ministers, Cletus Avoka and Rashid Pelpuo, hinted journalists that they would be reassigned to take over as the leaders of the Majority side.

Not only have members of the Majority raved and ranted over the matter, but the NDC as a party has joined in the condemnation of the ripples of the reshuffle.

Meanwhile, a crunch meeting held at the Castle yesterday to nominate the leadership of Majority National Democratic Congress (NDC) in Parliament ended in a deadlock, as no names was agreed on, according to information gathered.

DAILY GUIDE has learnt that the crisis meeting, which was attended by President John Atta Mills, national chairman of the party, Dr. Kwabena Adjei and the Majority Caucus in Parliament, failed to come out with compromised personalities and it has been decided that there should be a follow up meeting today.

President Mills has come under a barrage of attacks from some NDC MPs for 'poaching' their leaders, Alban Bagbin, Majority Leader; John Tia, Majority Leader and E. T. Mensah, Majority Chief Whip for ministerial portfolios and further maneuvering to impose sacked Ministers, Cletus Avoka and Abdul-Rashid Pelpuo, on them as leaders of the Majority side without consulting the Majority caucus.

Even though Castle had denied that its preferred candidates are the fallen ministers, there are strong lobbying going on to ensure that the MPs agree on the two former ministers.

Citi FM reports that the MPs insisted that they want their exemplary leader, Bagbin, to remain at post.

According to the report, the MPs would not mind if E.T. Mensah and John Tia should move to the executive arm of government as ministers of state.

However, some Majority Members including Alfred Abayateye, MP for Sege, had earlier told DAILY GUIDE at the Parliament House every member on their side was qualified to lead, adding that the Castle meeting was going to come out with compromised candidates who could build consensus in the House.