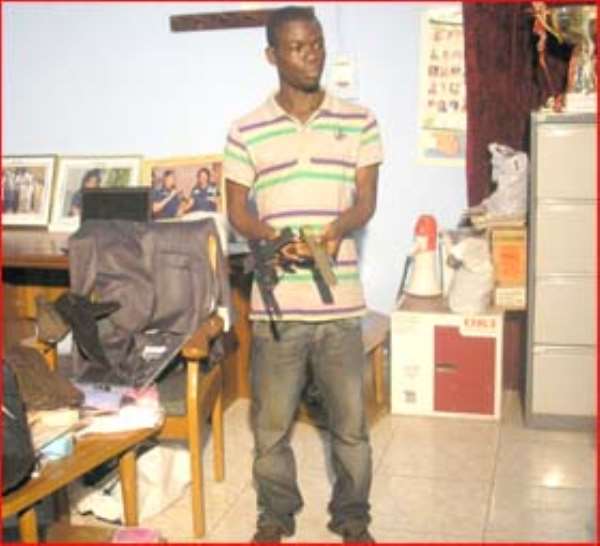 THE AIRPORT District Police Command has arrested one Raymond Akwesi Sarfo, 27, who together with his accomplices Paa Kwadwo and Okechuku; specialize in robbing boutiques under the guise of purchasing items from the shops.

The 27-year-old was arrested yesterday after he robbed Britz Exclusive Boutique of assorted things amounting to GH¢5,290.

According to the Regional Police Commander, DCOP Rose Bio Atinga, the suspects have been on the wanted list of the police for some time in connection with various boutique robberies that have hit Accra.

On January 27, 2010 Sarfo went to Britz Exclusive Boutique at Airport under the pretext of buying some wares. While there he pulled a gun on the shop attendant, tying her up with a robe before putting her in the dressing room.

He then got into a waiting taxi and bolted, but his victim, who was able to free herself, raised the alarm, attracting neighbours and passers-by who together with a driver arrested the suspect.

Other boutiques that have suffered the same fate are Special Plaza and Nyemi Secret Boutique in East Legon.

After he was arrested the suspect revealed that he and his accomplice Paa Kwadwo are processing admission forms to enroll in some private universities in Kumasi and Accra.

The Deputy Regional Police Commander, ACP Christian Tetteh Yohuno, used the opportunity to appeal to such education institutions to be weary of the persons they admit.

At the time of going to press five victims had identified Akwesi Sarfo in an identification parade at the Regional Police Headquarters.

DCOP Atinga has called on members of the general public who might have been victims of the suspected robber to come to the Regional Headquarters to lodge complaints and also help identify him. She said efforts are being made to apprehend the other suspects.