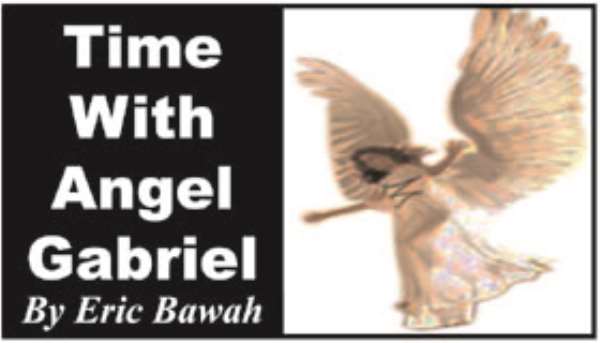 I HAVE had cause to write on many occasions in this column that I have enough vocabulary in my arsenal of words to the extent that I hardly consult my lexicons when writing any piece.  In fact, I am so cosmopolitan that I do not need any Jupiter to define any words for me.

Anytime I am forced to go for my dictionary, it is because somebody who is supposed to know better has goofed.

Mr. Richard Quashigah, a lecturer and the newly elected Propaganda Secretary of the NDC has forced me to go for my dusty dictionary this time around to see whether my understanding of propaganda is right.

Listen to the tenth edition of the Concise Oxford Dictionary on PROPAGANDA:  “Information, especially of a biased or misleading nature, used to promote a political cause or point of view”.

And so if a lecturer lands a job as a propagandist of a political party, he knows the job that he has been commissioned to do and do well. Undoubtedly, Richard Quashigah will be a good propagandist, going by the definition and his effusions anytime he appeared on the GTV Breakfast Show and his comments when the nation was forced to keep wake following a hoax on earthquake.

According to Quashigah, the NPP deliberately used that hoax to distract people from congratulating the NDC for a successful congress (sic!!!).

Anyway, Mr. Lecturer, what is the big deal about organizing a successful congress?  Are political congresses supposed to be in the form of war?

The Akans have a saying that if someone who has never bought meat before happens to buy a liver, he shouts from the rooftop, calling people to lend him an ax to cut the liver.

The NDC has not had it easy anytime they organize their congresses, and so when this one went smoothly they wanted the world to stand still and congratulate them for a job well done.

The NDC is noted for violence because they graduated from a bloody revolution.

They always act together with focused violence, and they are not afraid of anyone, particularly when the founder is around. In fact, they always provoke violent confrontations anytime they assemble.

The other time when they had their congress at Legon, the founder squeezed the balls of the then acting General Secretary of the party, Mr. Bede Zeden.

When Kwasi Botwey mounted the podium to deliver his message to the delegates, he was hooted at and cowed down. As for the then Chairman, Mr. Obed Asamoah, only God saved him from being lynched.

Kofi Asante, then an Honourable Member of Parliament, was whipped by supporters of the founder, and the gentleman had to resign from the party and parliament.

Then came the grand show of violence when the party organized yet another congress at Koforidua.

At that fateful and wish-to-be-forgotten congress, a former Women's Organizer of the party, Madam Frances Essam was brutally assaulted and she had to run away from the congress grounds with blood oozing from all over her tender body.

Obed Asamoah had to endure the pain of holding on to his urine as he sat at the congress, fearing to visit the gents to urinate. As for Professor Wayo Seini, he was not allowed to go out to offer prayers to his God as a Muslim.

The angry Azoka Boys, who are supposed to be Muslims, threatened to kill him if he dared walk out to perform his mandatory prayer to God. That day began the rise of Baba Sofo Azorka to criminal eminence.

Those who feared for the repetition of violence at the Tamale congress looked back to the two scenarios to predict the doom and were right in view of the fact that delegates were going to enter the lion's den where Sofo Azoka, a known troublemaker, was in full control.

For me, the so-called success of the Tamale congress was due to the fact that delegates and accredited observers were literally quarantined at the WAEC Hall where the congress took place.

The presence of a large number of  soldiers and policemen brandishing AK 47 assault rifles was enough for whosoever wanted to cause trouble to rethink and behave well.

And so the night after the congress, somebody decided to send text messages to some radio stations and individuals that Ghana was going to experience an earthquake and advised people to stay outdoors to save their lives.

Fearing death and being so docile and ignorant, some people obeyed and quickly moved out of their rooms with their children to keep wake on the streets and football parks.

As for those living by the coast, they saw the beach as a convenient place to dwell in anticipation of the apocalypse.

The whole thing turned out to be a premature April fool's day prank and we cursed whosoever disturbed our sleep that day.

Richard Quashigah had returned from the Tamale congress, and when he was interviewed he told the whole world that it was NPP supporters who planned that hoax to distract people from congratulating the NDC for a successful congress.

Habba, Mr. Lecturer, were you reeling from your success at the polls or you were possessed by a delusion of grandeur?  As a lecturer, I can imagine how your students were describing you on the day you made that unfortunate statement.

Probably the NDC government should send you to the USSR where political propaganda originated and is still used to deceive unsuspecting citizens.  As for us in Ghana, we have grown past such infantile antics.

Anyway, why didn't the NDC use the same hoax to distract Ghanaians from discussing the Koforidua congress which turned bloody?  Or they were not smart enough?

Probably Mr. Quashigah wanted to show his boss that he could do better than the former Propaganda Secretary, Fiifi Kwettey who eventually landed a job as the Deputy Minister of Finance after hoodwinking Ghanaians in the run-up to the 2008 general elections.

Mr. Quashigah seems to have the funny belief that when you are able to lie well, you stand the chance of being appointed as a minister in Mills' government.

After all, those who lied during the electioneering campaign like Betty Mould (Madam Kangaroo Court), Ama Beyinwa Doe, Agyenim Boateng, Fiifi Kwettey etc. landed ministerial jobs after apologizing to the Vetting Committee of Parliament. But Mr. Lecturer, should we stoop so low because we want a ministerial appointment?

Mr. Quashigah was around when Aki and Popor were made deputy ministers. From all indications, Quashigah is a better material than the two boys who are making a mess of things.

If today he has been made the propaganda secretary of the party, he should learn the rudiments of the job well rather than playing earthquake politics. This overzealousness will not help him in anyway. Woezo, Efo Quashigah!!!